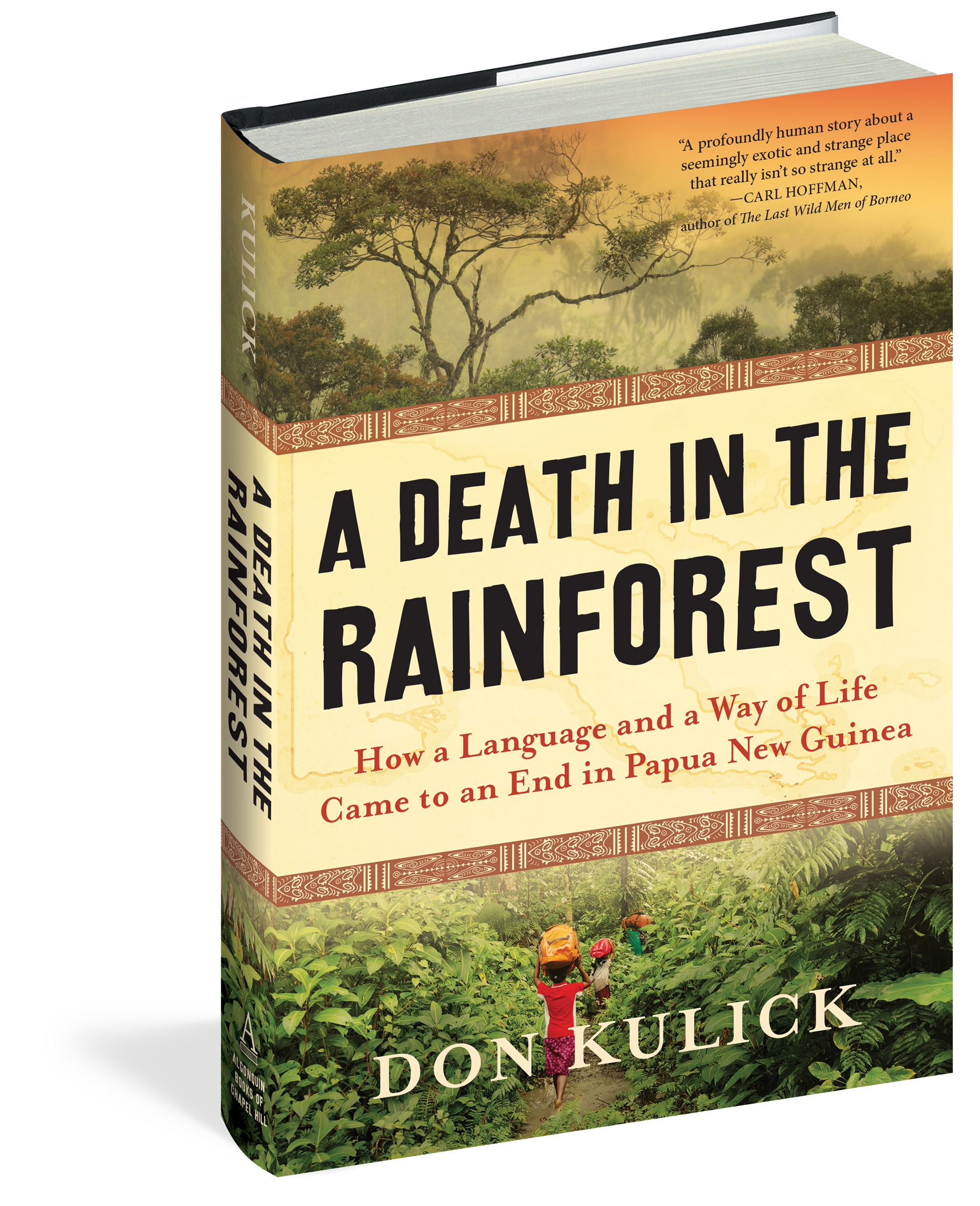 Alex Golub: Now, many people who don’t study Papua New Guinea but who are involved in anthropology will know Papua New Guinea through the work of Marilyn Strathern, [or] in a slightly different way, maybe Roy Wagner. And Marilyn describes Papua New Guineans as having dividual selves or, they have this very exotic theory that their selves condense many relationships. You provide a very individualist portrait of Gapuners.  They tend to really value their autonomy and are encouraged to be self-reliant. What should people who read Strathern think – how would you recommend reconciling that with your portrayal, which seems a little bit different?

Don Kulick: I don’t really know what to do with that because I think Marilyn Strathern’s understanding of Papua New Guinea is very heavily – and I am sure that she would be the first to agree – it’s very highly based on her experience with highlanders. Now again, Papua New Guinea is a very big country, there’s lots of different cultures. It is not all the same. I also thought Marilyn was writing in a very sort of abstract way – I don’t think she will actually say that people see themselves as dividuals. That is an anthropologist’s understanding of Papua New Guineans’ sociality.

And what I see in Gapun is, certainly, people are connected to one another. I mean, sorcery is a great connector. Because, if I do something, then I don’t have to die, but maybe my nephew will die, or my sister will die. So again, we are all connected in that way and my actions will influence other people, often in ways, or sometimes in ways that go against their own self-interest. And I have an example from the book.  If somebody steals a battery that somebody managed to buy somewhere: I steal a battery and got caught. I can say that I did it, but it wasn’t me, somebody made me do it. And that is a perfectly acceptable excuse in Gapun. Which again, ties to the notion of dividuality – that we are the conduits of action, but we are not the agents of action. So, in that sense, I think that’s very similar. But again, what I saw in Gapun, from the very start, was not only how people are incredibly, incredibly individualist, it’s really all about themselves. But they are socialized to be that way. Babies are continually being socialized like “it’s not yours, it’s mine!” “Whose is it?” And, you know, I think people who even work in highlands, I am thinking of Bambi Schieffelin’s work, for example, she writes about that constant question: “who does this belong to?” That is a crucial fact for anything – in order to do anything, use, or steal, or eat, or throw it away, you have to know that. So, there’s an ownership thing that really socializes people into standing up for the rest. You know, the kroses you were mentioning earlier, the swearing, it’s all about women saying: “This was mine, you destroyed it, you screwed with it, I am pissed off at you, and I am now abusing you for it.”

Alex Golub: Yea, they are individuals, but they are very permeable.

Don Kulick: That’s a good way of putting it, exactly. They’re permeable. They’re continually being impressed by other people’s wills, by their desires, by everything. So, yes, I have had very confusing conversations with people who steal things from me in the village.  I asked a young man: “Why did you take my soap?” “Because I asked you for it and you didn’t give it to me. Therefore, you made me steal it.” “But it’s the only soap I have!” [laugh] So, again, I find this very curious. I see humor in it, but I also see that this is how people die. I mean, you always die because somebody did something to you. And it doesn’t have to be you who did it, somebody else did it. And you’re dying for that person’s wrongs.

Don Kulick: But again, you’re the one who dies. Nobody else dies. That’s how the individual emerges. It is, again, I think this is also Marilyn Strathern’s point, it’s the individual emerges out of relationship. I see this very clearly in Gapun. I think the tonality, or the tenor of individualism is perhaps different in Gapun when compared to the highlands. But I do think that we’re all connected in the sense that we all influence one another, in ways we can’t control and don’t understand. It’s very Papua New Guinean.

Don Kulick: Absolutely. I mean, Gapun could be a case study for that.

Alex Golub: One of the sorts of melancholy dimensions of – this melancholy situation is the “language death” that you also include in the title. Can you tell me a little bit more what it’s like to watch this language die? And it seems like of those contrarian themes in this book in addition to some of those contrarian ones you might talk about, is that you don’t have the standard take on language death – that there are these precious languages that have to be preserved that when they die, the world loses a precious bit of diversity. That’s not exactly what you’re saying, is that right?

Don Kulick: It’s not what am I saying. And I have deep respect for linguists who work with endangered languages. I really do. But, I think there are many linguists who work with endangered languages these days who go for the biodiversity trope claiming that language are endangered species, So language are like pandas and whatever other species that is now on its way out. And they claim that languages are like that. I have always found that a very difficult metaphor, not because I don’t appreciate its potential rhetorical power, because it does have some power. But I think it’s because it ignores the people who speak the languages. And I think that kind of metaphor is wrongheaded – to presume  that we should look to the natural world as ways of understanding language is an error. The natural world is exactly the place we should not look to when we want to understand a phenomenon like language death. We should be looking at, for example, the fate of the political parties, or the fate of religious movements. We should look to the social world to understand language death. Languages die because people stop speaking the language. So, the question is, how do they die? What are the dynamics that produce a population of people that stops speaking their language for various reasons? So yeah, I argue in the book against that very worthy metaphor.  I don’t think it helps us. And I think it also risks wrongheaded blame.   The last people I want to blame for losing the language, or for abandoning their language – for not speaking and not transmitting their language — are the speakers of the language, because that makes it seems as though they had a choice. It suggest they had a choice and that they decided not to. Sometimes that does happen – sometimes people do decide not to teach the language to their kids. In Gapun, no one had ever made that decision. That’s one of the things that drew me to the village in the first place – that I realized that nobody said, “we’re not gonna teach our language – we don’t like our language, [or] our language is not useful.” Nobody said that. They all said: we like our language. Their reason is, but babies don’t want to speak it. Now that, for me, is really cool, what’s going on there?

Alex Golub: You have the sentence at the end of the book where you say the speaker didn’t abandoned Tayap, Tayap abandoned them. That was such a powerful sentence and also so unexpected. What did you mean when you wrote that?

Don Kulick: Well, again, I mean that it is beyond their control, basically. I mean, I think, one of the things that linguist likes to tell us is that we can revitalize, or we can help to revitalize, and we can. Anyone who wants to get their language revitalized should have all the help that they asked for. If the villagers suddenly decide that they want to use my grammar to help them to revitalize, I would be all for it. I would give them whatever they wanted to do. But the fact is that they don’t want that. And I think that to focus on the language ignores the processes that had resulted the death of the language. And when I say that Tayap had abandoned them, I mean that the historical processes of colonialism, Christianity, capitalism, have actually resulted in a situation that their language is just out of their control. As language always is – language is always out of individual control. But this is a situation where I think the language itself – it’s gone. It’s going. And I mean that in the agentive, in the sense that the language is going. And I draw parallel there with the spirits in a rainforest. You know that my old teacher Raya said that “you know, we use to see those things in the rainforest, we use to see these – eels, crocodiles spirits, now they are not there anymore. They must have all gone.” That’s why we draw parallels to a language. Maybe you can say the same things about them.

Don Kulick: Yeah. But again, I hope that people, you know, when they read the book – I mean, you’ve mentioned the humor, it’s called the death in a rainforest – and death are never happy events. But I hope that it’s not a total downer [laugh].