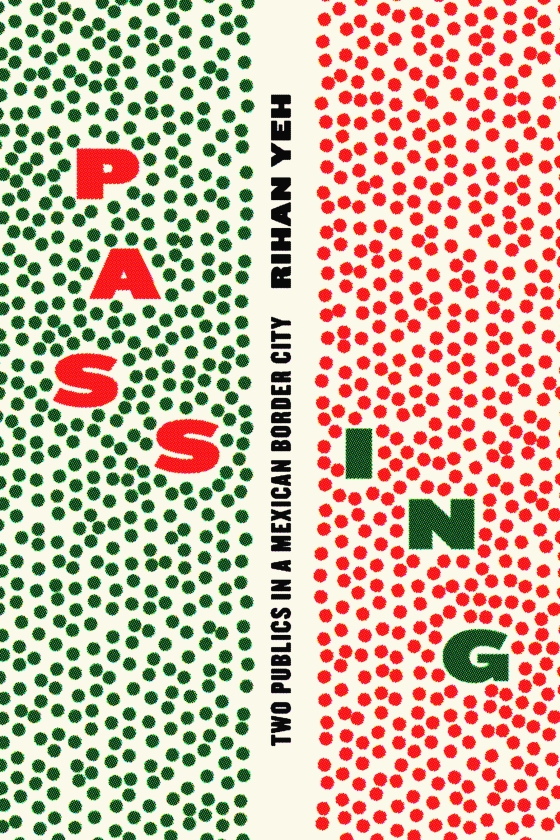 Héctor Beltrán: In your book you conceptualize the hearsay public to provide a critique of liberal notions of publicity. Can you unpack how this relationship frames your argument, and the ethnographic labor involved in making these connections?

Rihan Yeh: Passing looks at how, in Tijuana, a middle-class public oriented towards liberal ideals of public communication both faces off against and intertwines with a popular, working-class public that takes shape through genres of hearsay: communications framed as that which “everyone knows.” For me, what’s interesting about the hearsay public is that it provides a critique of liberal publicity from within. This isn’t a social formation based on any authentically ‘other’ cultural tradition; it arises from processes of marginalization and denials of recognition that are inherent to liberally-oriented “we”s. These “we”s are always creating more “they”s out there, and the hearsay public is one – to me, very compelling – way to inhabit that position of the third person.

To see ethnographically how middle-class and popular senses of we-ness take shape in relationship to each other (as well as to the United States, via the border), you need a method that will hone in on the dialogic overtones of people’s interactions across a really wide variety of settings, from, say, checkpoint encounters to dinner-table discussions. These interactions, of course, also necessarily have to involve people not just from one urban community or socioeconomic niche, but from many, many walks of life. The ethnographic labor is in being there in all these different situations and being able to put them together—or, rather, seeing how other people put them together, on the fly, as they try to carve out a place for themselves in the city, in the nation, and in the wider world.

Héctor Beltrán: Your book is titled Passing. This is also the title of a 1920s novel by Nella Larsen. In her novel, we meet two African-American women who “pass” across the color lines in different ways – one by joining a Harlem cultural elite; the other by hiding her true heritage. The novel is as much about public and private selves as it is about the performance of whiteness in relation to class mobility.

You certainly address the performance of class necessary to belong to the different “we”s (Mexicans, Tijuanenses, Latina/os, etc.) that become articulable in different contexts across your text. How do you see your work addressing practices (or performances) of passing across the color lines?

Rihan Yeh: One of the fascinating things about Larsen’s novel is how, even though the title alludes to racial passing as the book’s main theme, there are so many other kinds of passing involved. You mention private selves and class mobility, which resonate strongly with my copycat book. But (spoiler alert!) there are also the homoerotic undercurrents, and then, as if that weren’t enough, the incredible final scene where the line between life and death becomes literal – even, physically embodied in the edge of the building – and ‘passing’ turns into the issue of the heroine’s not knowing, even for herself, if she pushed her friend over the edge or not. It’s that complexity of passing, its capacity to bring so many social and personal strands together and create a crisis out of their resonance, that I hope my book illuminates in the case of the border as well.

As far as color lines, the situation here is obviously both historically related (insofar as US racial regimes are key) and radically distinct. At one point in the Introduction, I say something about how race is foregrounded and class backgrounded in the US, while in Mexico it’s just the opposite. That is, there’s a parallel worth exploring between the myth of the US as middle-class and the myth of mestizaje, or racial mixing, in Mexico. Both are homogenizing narratives that served throughout the 20th century to build some semblance of national unity, and they’ve both been seriously challenged over the last few decades. At the border, these two national idioms of status and belonging come together in a really unpredictable fashion. On a personal level, all kinds of pitfalls open up: possibilities for being ‘outed’ as not quite or not really being one thing or another (satisfactorily middle-class; satisfactorily Mexican). This is what in Larsen’s novel, in the lingo of the ‘20s, is called ‘queering’: “oh, I queered that, didn’t I,” means, “I ended your game of passing.” The stakes of this at the border can be quite high too. The question is whether that constant undermining of self and status can generate some kind of socially transformative potential, such as we might read now in the term queer.

Héctor Beltrán: I really enjoyed the comparisons you made between the walls around homes in La Chapu (Tijuana’s posh residential district) and the walls around the country club. In La Chapu, the walls are much taller, more prohibitive, more functional, whereas the low decorative walls around the country club “…exist to be crossed; the distinction between each side is evoked only to be surpassed in the same gesture. The walls literalize the social barrier even as the invitation bluntly states, ‘There is no wall.’ It is just an illusion, it flaunts, it is only real if you think it is.”

This reminds me of a passage from Wittgenstein’s Philosophical Investigations:

“But when one draws a boundary it may be for various kinds of reason. If I surround an area with a fence or a line or otherwise, the purpose may be to prevent someone from getting in or out; but it may also be part of a game and the players be supposed, say, to jump over the boundary…”

Yes! And in another part of your book you say, “Sometimes passing is tense, while other times it is a game; sometimes it is accomplished in laughter.” I’m interested in the relationships you see between prohibition, passage, and gaming the border.

Rihan Yeh: The first thing to remember is that games aren’t necessarily fun—in that particular passage you cite, the laughter I had in mind does create a bond between the laughers, but the person being laughed at is just around the corner and not at all unaware of what’s going on. To game the border is to try to set up some sense of agency and self-assurance in face of a truly humongous state apparatus that has basically been designed to annihilate these, even when it pretends to do the opposite. (I’m thinking here of the happy ratification the border provides those who think they can take their legal passage for granted. My own loss of my immigration status in Mexico this past year, and consequent inability to cross the border without losing permission to return, has only hammered home the arbitrary and absolute power of states over and above whatever privileges indeed statistically hold). That is, a very old set of practices could be summarized as “gaming the border,” and on a mass scale they have real effects on how the border works (think of all the people who commute across it to San Diego every day)—but these practices are always vulnerable to prohibition popping up again. I don’t believe that anyone gaming the border can really and truly forget that fact, no matter how hard they try. Analytically and politically, we can’t afford to forget it either.

Héctor Beltrán: On the other hand, some might argue that treating borders with this “playful” approach downplays the lived reality of today’s national borders, especially as they become more pronounced, more militarized, more violent. With your extended ethnography in and along the border, empirically and conceptually, which part of your theoretical intervention do you hope that your audience will operationalize for a more nuanced, complex, and relevant “border studies”?

Rihan Yeh: As I said in my answer to your last question, I don’t think that ‘play’ eliminates the border’s sinister side, although it certainly gestures to a momentary ability to break free of it, and I think that’s a very politically important thing. Lots of people have complimented me on the book’s cover, and I think the designers did a brilliant job, but I have to confess I was pretty shocked when I first saw it—I’d always imagined the cover being mostly black, and this design seems so festive. Then again, in Larsen’s novel (thank you so much for bringing her up!), passing is flair, coquettishness, style, daring—some very playful things the beauty and attraction of which do not contradict but actually come from the danger with which they flirt.

So in sum, I wouldn’t want to oppose the book’s thrust to recognition of the border’s long upward spiral of militarization and violence. Instead, what I hope to have shown is how pervasive, far-reaching and profound the effects of this tendency are, way beyond the migrant populations we (and I mean both Mexican and US “we”s here) think of as those whom the border most directly affects. This institution is basic to understanding what Mexico is as a country and what sorts of democratic and social possibilities can take root here on a mass scale—and Mexico, of course, is just a case study speaking to these issues globally. To grasp the border’s implications, we can’t just look at the abject forms of marginality it produces; we need to see how these go hand in hand with new forms of privilege that are often as treacherous as they are exalted.

Héctor Beltrán: My final question is about your own crossings and passings. You’re a U.S.-trained anthropologist working and teaching in Mexico. What are some of the unexpected publics you have encountered? What kind of performances are required to belong or pass? What are the politics of knowledge production across these borders? Which walls call for crossings? Dismantlings? What kind of games are being played on either side? And, please, feel free to summon the hearsay public in your response.

Rihan Yeh: We all know that anthropological knowledge is constituted out of practices of passing (and queering!) that are at once finely tuned and utterly haphazard. I see my academic work in Mexico as an extension and transformation of the kinds of movements and dialogues we all develop as researchers starting, for most, in graduate school; of course, being based institutionally in Mexico has opened up possibilities and concerns that would have remained peripheral were I employed elsewhere. It’s extremely rewarding, for instance, that the students we work with almost all go on to teach anthropology in Latin America. A lot of my energy, then, is focused on expanding their horizons of passage, both northwards and southwards—for example, we’re just starting to get Mexican students doing fieldwork in Central and South America, and I think this is something incredibly exciting and important for anthropology in the region. Basically, I think there’s not enough sense that one as an intellectual can pass across all kinds of different boundaries, and the more students go outside of certain bounds that “Mexican anthropology” can sometimes seem to set up, the more productive and vital the discipline here is going to be.

The hearsay public is indeed, as you suggest, a great model for confronting these limitations, especially insofar as it posits the border as a limit imposed by power on what can be said. The hearsay public doesn’t respect boundaries; from a position of disadvantage, it finds ways of crossing, of smuggling its communications like contraband. Anthropology does a lot in this direction on both sides of the border, but it can and should do more: to traffic ideas in the face of every most subtle or blatant kind of prohibition that authorized discourse can set up. As the university system transforms, this kind of traffic is going to be more and more crucial in the US as well. Just what it can look like is, of course, an open question.