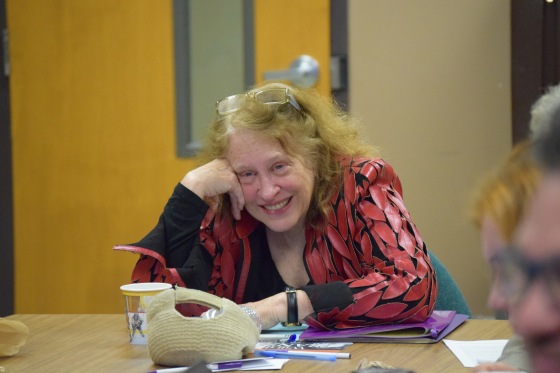 What is your morning routine?

I’m a night owl with frequent insomnia.  On a good morning, the CBC radio alarm plays local and global news from 7:30-8:30.  I frequently wake up when it stops playing and turn it back on to catch the news again at 9 while doing a modest exercise routine supervised by my two manic cats.  I wander downstairs, feed them and make a pot of tea before reading the Toronto Globe and Mail and doing the morning crossword.  Then it’s time to check the e-mail.  With an overview of what has erupted there overnight, I adjourn to the kitchen to scrounge breakfast, usually leftovers.  Back to the e-mail for what can be done fairly easily.  By 11 or 12, I’m ready to face the office or various meetings.  I can manage earlier if I set extra alarms, but then I fade mid-afternoon and ruin my customary evening spurt of productive work.

What is the favorite thing you have written? END_OF_DOCUMENT_TOKEN_TO_BE_REPLACED

William Leap is retiring after being a professor of anthropology at American University for 46 years. Ilana Gershon asks him to reflect on his career.

What article or book that you wrote are you most pleased with?  Could you talk about the story behind writing it?

Easier than citing a single book or article, I’d prefer to talk about how I am most pleased to find how I have maintained certain consistencies of argument over several years of inquiry, despite my changes in research topics and theoretical paradigms and despite academic and broader politics.

For example, my current studies of language and sexuality have moved far from the ideas outlined in Word’s Out , but one issue addressed there still haunts my research and writing:  how do people learn to talk about same-sex desires, practices, and sexual sameness when such talk is so often assigned negative values by peers, parents, news media, political officials, officer co-workers, department chairs, and other regulatory sources.

I addressed similar regulatory questions in my earlier studies of American Indian English (AIE), when I suggested that AIE fluencies helped maintain ancestral language receptive competence in settings where ancestral language fluency (and fluent speakers) were widely despised. The parallels between AIE and the discussion in Word’s Out were not exact, but the processes of overhearing, and the ensuing accumulations and conditions of hyperdiversity were similar.

I did not pursue those parallels in Word’s Out, but I began to do that in subsequent writing, beginning with “Language socialization and silence in gay adolescence,” a revision of a (truly dreadful) article that first appeared in a special issue of The High School Journal. Thinking about gay language learning as language socialization prompted further thoughts about processes of linguistic accumulation, textual refusal, audience reception as well as the global circulations of North Atlantic gay language(s)  and their impacts on localized sexual discourse(s).

So how did your research in Cape Town fit into these continuities?

I revised the “language socialization paper” while in residence at the Centre for Rhetoric Studies at University of Cape Town. I heard many stories about language/sexuality socialization from people living in Cape Town’s City Center and in the nearby Coloured and Black townships, thanks to the support of the Triangle Project, a Cape Town area AIDS advocacy group. This was my introduction to the uneven inflections of language, sexuality, gender, race, and class that were reshaping sexualities as apartheid transitioned to representative democracy in the western Cape. I was tracing how those inflections impacted sexual language learning in the late apartheid period and this disclosed details of Cape Town area sexual geography. I could locate moments that language shift exposed competing loyalties between sexuality and place. The book project I am now finishing explores the not-so-secret “secret codes” linked to homosexuality before the Stonewall moment in the US, and was inspired in part by the Cape Town research, especially its demand that linguistic history engages with racial and class diversities and the material conditions that sustain them, instead of ignoring these diversities.

What article or book was hardest for you to write, and why?

Every article and book has been difficult for me to write. I grew up in a small town in North Florida in the early 1950s, so Standard English was not my first language, either for speaking or for writing. Many of the conventions of standard speech still elude me. Plus, what might fashionably be termed late-onset dyslexia ensures that revising, editing and proof-reading become time-consuming tasks. But even if writing takes much longer to complete than the assigned deadline allows, writing is still an exciting activity. Writing gives me a chance to experiment with ideas and it always leads to unexpected outcomes. I learned long ago to stop trying to create a detailed outline in advance of the first draft: I sketch out three or four intended themes, assemble some data, and see where it leads—hopefully to successful, if at times unexpected, outcomes.

You started the Lavender Languages Conference in 1993 and are the founding co-editor of the Journal of Language & Sexuality. What motivated you to do this important organizational labor?

The Lavender Languages Conference has been creating space for conversations about language and sexuality since 1993, and it still does as, I explained elsewhere. We named this event “Lavender Languages” to avoid taking sides with people doing “lesbian/gay studies” or “queer theory,” a hot-button issue in the 1990s that probably doesn’t matter so much anymore. The phrase remains because of name recognition, but that too might change as time passes. The point is to maintain a space where people can discuss language and sexuality without fear of risk or retaliation. People already face enough of that in everyday settings, inside and outside of the classroom.

The Journal of Language & Sexuality is “indebted to queer linguistics” as an orienting theme, as my co-editor (Heiko Motschenbacher) and I explain in the journal’s mission statement. And queerness is always about messiness and irregularity. The Journal is a site where discussions of language and sexuality need not be contained within traditional disciplinary (or similar) boundaries. Our reviewers draw heavily on those criteria as they read and evaluate manuscripts, and so do the editors as we make final decisions regarding the contents for each issue.

What moment of fieldwork interaction do you still think about, amazed that you got to witness it and/or record it?

Doing linguistic fieldwork in sex clubs in the 1980 and 1990s. There were those (in anthropology and in the federal government) who said such work could not be done; and even if it were attempted, the results could not have any claim to scientific validity, and thus no impact on AIDS-related (or other) policy-making. Following ethnographic work of Ralph Bolton and Michael Clatz, I insisted that there had to be ways to conduct linguistic research in the erotic moment, a point which a group of us confirmed in the publication of Public Sex, Gay Space. For me, this meant conducting linguistic fieldwork at cruising sites, although as always, linguistic inquiry soon moved far beyond the scope of the linguistic moment.

In one instance, the cruising site data provided a basis for expert witness court testimony on behalf of a bath house which local government had designated as a health hazard and was seeking to close. My field data demonstrated that activities at this site were no more a “threat” to public health than were activities in the saunas and steam rooms in the area’s upscale health clubs and gyms, sites which local government had never attempted to raid or regulate. Why, I asked, was the category “health hazard” being applied so selectively to the health club I was defending? And whose long-term real estate investments were being secured as the uneven inflections were applied?

What piece of furniture do you most often talk to or about?

My swimming pool. This was my retirement gift to my partner and me. There are no Esther Williams-type water features or Olympics-like illuminations. This is a simple 25’x16’, cobalt blue-tiled, heated structure, providing room to float on a buoyant raft while enjoying the south Florida sun and listening to thematically appropriate CDs.