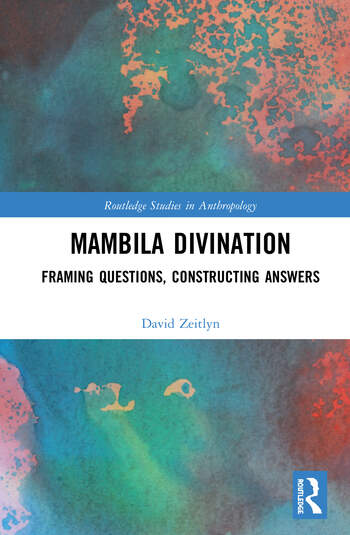 Stephan Feuchtwang: Is divination a ritual, despite its being improvisatory and dialogic?

David Zeitlyn: I have two problems with this question: the word ‘divination’ and the word ‘ritual’! We know now that there is enormous variation across time and space about what counts as divination or oracle (but for the sake of clarity I will give a rough and ready working definition below). What counts as ritual is also variable and unclear, especially at the margins. So I am hesitant about making big statements about divination, although I am prepared to generalise about the literature on divination (which of course is not the same thing). My conclusion about this is that anthropologists have spent too long talking to diviners, not enough time talking to the clients. In part, this is because of the lure of experts. Diviners often are local intellectuals, curious and articulate so we the anthropologists have gravitated to people like us: those who are both able and willing to answer our odd questions. Clients often have far more pressing things at stake (such as serious illness), and it is easier for them to tell us to go and bother the diviners rather than them. And as clients often travel to consult it is hard to follow up so we may not know what they eventually do with the advice they have been given.

My rough and ready definition: I am using the term divination in a very general sense for any arcane or occult means by which people gain arcane knowledge (Aune 2005, Zuesse 2005). Arcane knowledge itself is knowledge that is not available from everyday, practical activity and is more or less esoteric or occult in character, often about the future. (In other words, this is not a study of how some people find water sources (water divination or dowsing)).

Stephan Feuchtwang: More than other dialogical processes, such as conversation, is divination bound by a set of symbols?

David Zeitlyn: Here I think you and I are in agreement: there is more going on than ‘just conversation’. If I were trying to advise you about a course of action then I set out my opinion and try and explain why I have come to that conclusion. In many forms of divination, especially when there are texts of procedures to be followed then as well as engaging with these procedures, I have to be attuned not only to Stefan’s input but the contribution (actual or potential) of other people, critically other diviners who may say that my opinion is worthless because I have not followed the procedure correctly. The possibility means I have to be careful to do ‘things right’ guarding me against criticism from my peer group of fellow diviners. As Pascal Boyer is arguing in a paper in Current Anthropology (2020) this also connects to a way in which the results are seen to be trustworthy – because the procedures have been followed correctly the results are seen as not being just ‘something I say’ (just my opinion) but something I am reporting, the source of the opinion, the illocutionary author is not the diviners but as it were the mechanism (technique), and if performed properly then it is credible because it is not biased and partial as humans all too often are.

I discuss all of this in Chapter Three.

Stephan Feuchtwang: Why is a client-centred analysis only about the problems clients bring to diviners and not also about those symbols?

David Zeitlyn: I think it doesn’t have to be but in my case I am both trying to redress the imbalance and reflect Mambila practice. Mambila diviners (those doing spider/ crab divination commonly known as ŋgam du) will talk happily and extensively about the symbols on the leaf cards that are used. These are similar in design to those used by neighbours such as the Yamba and other groups to the south  (examples have been documented from many groups over the years). However in actual practice those meaning seem not to be referred to. This is a puzzle which I think relates to the diffusion of this specific form of divination over the long term: (And I note ŋgam reconstructs as a proto-bantu term for doctor/ specialist). But granted my emphasis on what clients, and in my case Mambila clients do in and with divination if they don’t use the available symbols then I don’t think it right to insist (or impose) on a symbolic reading In the book there is a Mambila myth which explains why you cannot (strictly why you can no longer) talk to spiders. But as I point out the myth takes for granted that the spiders know things without ever explaining the source of their knowledge. I would be delighted were a Mambila scholar to do more work on their sets of symbols (I am not sure is there is a singular system: that seems to me to be one of the things that such a scholar can discuss) but that is not what I have done in the book, which ends up being more of a sociology of the issues that people (mainly Mambila) use the divination to help resolve and something about how they talk about these things. The talking about these things has two parts: in the process of doing divination, that is the process of divinatory consultation, there is a set of issues of how you frame the question being asked, and how you respond to the answers given as you frame new questions. In this part of the book I consider parallels with Harold Garfinkel and see how ostensibly contradictory answers are taken as being prompts either to change or widen the question frame. Towards the end of the book I report  some life history interviews that I have done quite recently. These were looking at the role divination has played during ‘life crisis’ moments in peoples’ lives. The responses were interesting: even diviners seem to have been quite reluctant to divine. And more people than I expected said things like ‘tried it, didn’t like the answers, never again’. So there seems to be variation in Mambila society about things like divination that has to temper how I generalise about them. Now that seems a good concluding point for an anthropologist: generalise with caution!