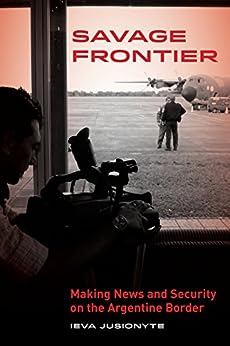 What led you to study the conjunction between security and news reporting in this particular town?

I have first heard about the region encompassing parts of Argentina, Brazil, and Paraguay–commonly called “tri-border area” or “triple frontier”–through the media. It was portrayed as a dangerous place, a haven of organized crime, where trafficking of drugs and people, contraband, and money laundering were rampant. Having worked as a news reporter, I was aware that journalists tend to write stories that fit into larger narratives, which media organizations adjust depending on market logic as well as on their relationship with the government. We know that the media can both work as a propaganda machine, serving to uphold state ideologies, and it can be used as a watchdog on the political and economic establishment. My decision to go to the tri-border area was motivated by a wish to understand how local journalists, who live in the town about which they write, maneuver and maintain the boundary that divides illegal activities into two categories: those that can be made into news and those that must remain public secrets. Unlike reporters sent by national or international media, who come to the border looking for sensational stories and often reproduce the narrative of the violent and savage frontier, local journalists are also residents of the area, so they are directly invested in solving existing problems of crime and insecurity in their neighborhoods at the same time that they seek to depict the place as a safe destination for tourists. In the book, I show the day-to-day realities of journalists, as they balance between making news and making security, and argue that media practices in a remote border area must be understood within the historical context of state violence in the region.

How does turning to news-making as a fieldsite illuminate a distinctive connection between national identity and national security?

News-making is a key site in which national identity is produced and through which it is circulated. The idea that the press serves as a vehicle for creating nations as “imagined communities” is attributed to Benedict Anderson, and although his thesis has drawn criticism regarding the historical accuracy of his claims as they apply to Latin America, it continues to illuminate the process and the conditions of nation-building. Perhaps nowhere is this as clear as it is in the borderlands, at the edges of nation-state sovereignty, where the airwaves of one country compete against those of its neighbor’s. In the second half of the 20th century, when Argentina, Brazil, and other states in the region became concerned with national security (this was especially notable during the military regimes), the governments began paying much more attention to media broadcasters in border areas: investing in radio and television infrastructure, as a means to spread political discourses emanating from the state’s capital, was akin to defending the nation against a foreign invasion–one that was not carried out by an army of soldiers but advanced by cultural programming. In the tri-border area, this competition was between Argentine and Paraguayan media, transmitting in Spanish, and Brazilian media, transmitting in Portuguese. This battle over airwaves is still ongoing: complaints that signals from more potent Brazilian antennas were interfering with Argentine radio and television broadcasts were recurrent issues debated in town council meetings during my fieldwork–a proof that in the border region questions of national identity and national security continue to be highly contested to this day.

How do journalists’ symbiotic relationships with security forces such as police and military officers affect how crime is reported?

Security forces have a strong presence in the border area and they provide a substantial amount of news material for the local media, covering a wide range of topics, from routine crime investigations to military ceremonies and parades to large-scale intelligence operations. It is a symbiotic relationship because journalists need stories (reporters are often asked to produce half a dozen news pieces per day), while security forces want good publicity of their work and readily provide the media with interviews and press releases. However, this convenient arrangement means that journalists rarely ask difficult questions, for example, regarding police impunity, corruption, and complicity with criminal actors and organizations. Usually, crime stories are authored and authorized by the security forces, with the media serving merely as the outlet for circulating the official version of events to the public. But not all towns in the tri-border area are alike. Compared to the Argentine border town of Puerto Iguazú, where local news organizations are rather weak, do not have resources or training to do investigative journalism, and cannot protect reporters if they decided to pursue such stories, some media companies in Ciudad del Este, a larger city on the Paraguayan side of the border, have done important investigations into organized crime. Nevertheless, due to corruption that entangles politicians, business owners, law enforcement, and even the media, critical crime reporting remains severely limited in the region.

Often what is illegal is still socially acceptable, and especially in your fieldsite of a border town. How did journalists engage with this tension?  Did the medium the journalist was using – text or video – affect how they negotiated this tension?

Difference between practices that are legal or illegal and legitimate or illegitimate was very important for my attempt to understand how journalists decided what became news and what information was to remain off the record, as a public secret. Socially legitimate, albeit illegal activities, such as food contraband or smuggling of fuel, were rarely covered in the media. Journalists did not report on practices in which they (or their families, or neighbors) frequently participated. Even the tools of media production–cameras, cassettes, computers–were regularly bought in Paraguay and brought across the border into Argentina illegally, avoiding taxes and other import prohibitions. On rare occasions, when illegal and socially legitimate activities became the subject of news stories, the print media had an advantage over television and even over radio. I learnt this while working on an episode about irregular adoptions and child trafficking for an investigative television program “Proximidad”: people were more willing to share what they knew when the interaction between journalists and residents did not entail the use of cameras or voice recorders.

One of the themes in your book is a running comparison between being a journalist and an ethnographer, and you managed to be both in this Argentinean border town.  You also talk a great deal about how difficult it was to move knowledge that was generally known but not openly discussed into the public sphere.   Could you discuss whether it is a different process for a journalist and for an ethnographer, and if so, how?

Anthropologists and journalists both face the challenge of making knowledge that is familiar to few available to others, but it is important to recognize that our work follows professional standards and ethics that may diverge. Journalists must protect their sources, just as ethnographers promise confidentiality and anonymity to their research participants, so from the point of view of those asking the questions and observing behavior the difference is not that obvious. Yet people who agree to disclose sensitive information, to share their private stories, see a difference between a reporter and an ethnographer. On the one hand, people are more familiar with news media as a genre of representation, and this familiarity can help build trust, although it could also undermine it–people are aware that the media sensationalizes issues. Anthropology, on the other hand, is a mystery. When I arrived to start ethnographic fieldwork, people were reluctant to talk to me about anything illegal because they did not understand what the information would be used for: Would I give it to the media, to the police, or to the government? Would the effects of making it public hurt them? With time, as research participants begin to trust the anthropologist, they are more comfortable sharing what they know. But then it is up to the anthropologist to decide what to do with this newly acquired, sometimes dangerous knowledge. Unlike journalists, who publish stories in order to draw attention to an issue, such as drug smuggling or domestic violence, in hopes that public knowledge about it would lead to changing social or political circumstances that make it possible, anthropologists often use the knowledge they gather to engage in internal theoretical debates with other scholars. This scope of our work, limited to circulating the findings within the academe, is not always clear to the people who share their lives with us, sometimes in anticipation that their knowledge could change the status quo. Of course, there are anthropologists–sometimes called engaged anthropologists or public anthropologists–who try to reach out to broader audiences, make their publications part of public debates on current issues, and push for policy changes, but this public engagement is not (or not yet) considered a defining feature of the discipline.