My dissertation “Khanna Bardyng? Where are you going? Rural-urban Connections and the Fluidity of Communicative Practices Among Sakha-Russian Speakers” examines the communicative choices and practices of Sakha-Russian bilingual speakers living in Yakutsk, the capital of the Sakha Republic (Yakutia) in the Russian Federation. While I’m not sure if page 99 is the best indicator of my dissertation’s quality—it does not showcase much of my own analysis at all—it does touch on a few themes that do surface throughout the work. Issues of mobility and urban-rural connections both come up on this page, which is part of a historically-focused chapter that provides the context for Sakha language usage during the early Soviet era and the changing ideologies that influenced the way it was (not) spoken in urban spaces. The “ethnic solidification” of the Stalinist period was also linguistic, in that it set in motion the growing association of Russian with the (modern, progressive, unified and Soviet) urban spaces and Sakha with the (backward, potentially nationalistic) rural spaces:

“Slezkine (1994b:444) speaks of the Great Transformation of the 1920s in the Soviet Union as a decade characterized by ‘fluidity’ and possibility. Conversely, the Retreat of the 1930s was a period of ‘solidification,’ when ethnicities and territories became even more fixed than before. From what I learned from my research participants, via stories they had heard from parents, it was also a time of even greater sedentarization. With collectivization, people became even more tied to a particular place on the land. Collectivization affected Sakha pastoralists differently, and perhaps not as severely, as Evenki or Even reindeer herders (Vitebsky 2005). Most rural Sakha were already more settled, moving only back and forth between sajylyk (summer pastures) and winter village, but an urban-rural divide was definitely beginning to be felt. People did not travel as often between city and village, I was told, because everything they needed, most significantly a job, was usually found in the village, on the farm. Due to the loss of infrastructure and subsequently further migration into the city, people once again needed to become kuoratchyttar (villagers who go to the city, to sell goods), and go to Yakutsk or larger towns. This lack of mobility between Sakha-speaking villages and an increasingly Russian-speaking city caused a hardening of communicative norms into a pattern that is still not completely broken.”

The remainder of the chapter analyses the ways in which language ideologies and communicative norms that did not favor the use of Sakha were reinforced in Yakutsk during this Soviet years, and the increasing distinctions developing between rural and urban linguistic environments which still impact how Sakha is spoken currently. From there, the rest of the dissertation then focuses on the revitalisation and revalorisation of Sakha language and culture two decades after the end of the Soviet era. I analyse the discourse surrounding language ideologies and how these ideologies are reinforced or challenged by communicative practices of speakers in Yakutsk—and how they are influenced by the increasing influx of rural Sakha speakers migrating to the city. Mobility and movement return to the fore as I discuss the relocalization of Sakha within urban speakers’ repertoires, and analyse the indexicality of code-mixing practices: speakers “move” within and between languages. I also look at movement at the level of language trajectories—how speakers move toward, or away from, different languages over their lifetimes (Wyman 2012). Understanding how a speaker’s social networks, educational history and migration patterns all shape language socialization over a life course reveals the patterns influencing the maintenance or loss of a minority language in both individuals and groups.

Jenanne Ferguson, “Khanna Bardyng? Where are you going? Rural-urban Connections and the Fluidity of Communicative Practices Among Sakha-Russian Speakers” University of Aberdeen, 2013.

Jenanne Ferguson is an Assistant Professor of Anthropology at the University of Nevada Reno. She researches Indigenous and minority language maintenance with a current project focus on verbal art, affect and moral/political communitas. She is also interested in looking further at the role of music in language revitalization. You can reach her at jenannef@unr.edu.

Her dissertation research was recently published as Words Like Birds: Sakha Language Discourses and Practices in the City from the University of Nebraska Press. 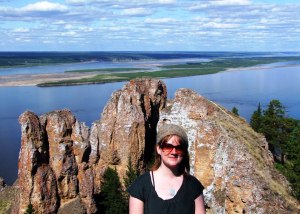