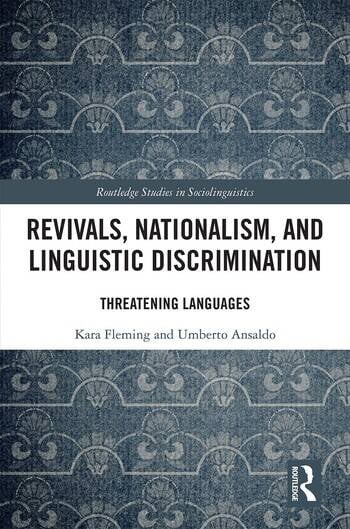 Claudia Matachana: Through the book, you made a distinction between revivalist and revitalization language movements and point that, in most of the literature, the difference between these two terms is not always made. What were the reasons to make this clear division? Or, to put it another way, what was the main motivation to write this book?

Kara Fleming and Umberto Ansaldo: We find it necessary to make a division between the two in order to make it clear that while the process of supporting truly endangered languages is basically positive (revitalization), the process of advancing a major language to the discredit of others is fundamentally negative (revival). We are aware that where these have been used interchangeably, our distinction may cause problems. In North America for example, revival is often used for revitalization. Overall the main motivation for writing the book was to clarify that while we understand and are sympathetic to revitalization movements which attempt to prevent languages from disappearing, we do want to critically examine why and how the concept of revival can be used to support movements or policies whose goals ultimately create rather than challenge inequality.

Kara Fleming and Umberto Ansaldo: Yes indeed – that while supporting endangered languages, researchers should be careful not to create the underlying conditions for language discrimination. As we say in the book, we are not arguing against language revitalization per se. Rather we want to caution that involvement in and discourses about revitalization/revival should be careful about the exclusionary, purist ideologies that often accompany such movements, and that claims that a particular policy, practice, or ideology supports revival should not be taken as a carte blanche to implement policies with exclusionary or hierarchical effects.

Claudia Matachana: In the chapter dedicated to the language situation in Kazakhstan, one of the interviewed participants (K9) said that he bears a responsibility to his history and language and he cannot just become part of other nation or ethnic group because that would be a betrayal. That idea of linguistic loyalty and betrayal may appear to be related with nationalism. Where do you think that this relationship between language, ethnicity and nation –which, as you show, is not only present in this case– began?

Kara Fleming and Umberto Ansaldo: Well, as other scholars have pointed out, the classic formulation of nationalism as “one people, one territory, one language” has its roots in European romanticism, but in each of the contexts we consider, ideas about nation, language, and ethnicity have their own local resonances and histories. In the specific context of Kazakhstan, for instance, conceptualizations of ethnicity/nation have roots in the Soviet “nationalities” system according to which every citizen had to belong to (only one) designated, officially recognized “nationality,” which has somewhat conflated the concepts of nationality/ethnicity in many post-Soviet contexts.

Claudia Matachana: One of the things I found more interesting about your book is that it presents a wide variety of examples that covers different political and geographical situations – Sri Lanka, Kazakhstan, Mongolia, Hong Kong and Catalonia – with a diversity of research methods –interviews, discourse analysis or documented political history. What was the reason for you to choose these diverse geographical locations for your study? How do the different research methods relate to each other and how did you link these specific methods to draw a general conclusion?

Kara Fleming and Umberto Ansaldo: We thought it would be most helpful to cover a range of case studies that illustrated our arguments in different ways, and with different dynamics. Some of the languages we examine are the languages of independent states; others, of regions or semi-autonomous regions within other states. Sri Lanka and Kazakhstan are both nations which had to form new policies and interethnic relations post-independence; in one case leading to civil war (Sri Lanka) and in Kazakhstan, to a complex set of hierarchies and interacting social structures. Mongolian is not exactly “reviving,” yet we can still see certain similarities in the kinds of discourses and nationalist ideologies that have been used to underpin the Mongolian context and the other cases. Hong Kong and Catalonia are both semi-autonomous regions where many people want to maintain or increase that autonomy, possibly by achieving statehood.

We also were keen to include both contexts that had been well-studied as well as less commonly discussed cases. For those contexts which have received little sociolinguistic attention – particularly Kazakhstan and Mongolia – we felt it was especially important to gather new data in the form of interviews, because there is very little published research relating to language ideology, use, and policy in those places. For Catalonia, for instance, there is such a significant body of work that we felt that a limited selection of interviews would have less to contribute to the existing literature. We don’t consider this book the final word on any of these contexts, necessarily – it is a limited account of one aspect of local dynamics in each place. Yet when taken together we believe these cases provide a robust illustration of how revival may play out and what kinds of tools / discourses may be used to advance revivalist (and covertly nationalist) projects, despite the different histories and realities in each place.

Claudia Matachana: Finally, your book shows how language is related to and used for political purposes, specifically its use in nationalist movements and as a tool of discrimination. What do you think is the political importance of these findings? How do you see your book speaking to the current political situation that is lived worldwide?

Kara Fleming and Umberto Ansaldo: We hope to be able to unmask what a powerful tool language is and how easy it is to manipulate. We believe that because of its ubiquity, necessity, and close ties to identity construction and expression, language is particularly vulnerable to being misused as a tool for political and social manipulation. In many contexts, language is heavily politicized as a key symbol of national and personal identity, yet many aspects of the sociolinguistic status quo are simultaneously naturalized – it is often considered simply self-evident and unquestionable that these languages must be revived / protected by any means necessary. What we hope to accomplish is disrupt this taking for granted by introducing questions about who benefits and who is disadvantaged by such processes, and how they might potentially be deconstructed and re-imagined to create more inclusive and equitable societies.