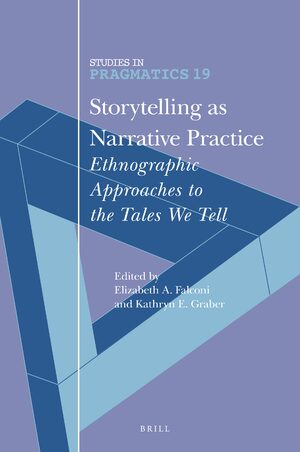 Dilara Inam: As you say you blur many taken-for-granted distinctions between spontaneous and rehearsed or quotidian and unconventional ways of telling a story. Also, there are crucial discussions on how to understand the concept of “everyday” as a category of analysis which became even more clear in Elizabeth Falconi’s chapter on Zapotec storytelling. How was your experience with working on storytelling as narrative practices holistically? With the increased interest in the concept of storytelling, how would people benefit from this book?

Kate Graber: Thanks for your question, which strikes at the heart of what we were trying to do in this book. This project emerged from a conversation that Lizzy [Falconi] and I had several years ago, in which we realized that although we were researching different genres of language—Buryat news stories and Zapotec folktales—our research participants were treating both as stories, somehow. The same analytical problems of storytelling animated these really different contexts, in Russia and Mexico: understanding what’s at stake in a particular society in demarcating what counts as “story” (and as a “good” story), identifying how tellers break through into performance, figuring out how they’re socialized into it, learning from the story audience’s uptake, and so on. Yet what I was researching—and what a lot of the other chapter authors in the volume describe—is usually analyzed in other terms: as media discourse, for instance, or as narratives of personal experience, in the case of other chapters. So we were interested in what ethnographically unites those different genres. What might a myth have in common with a family history, or a news story with the grand master-narrative of a nation-state? The rules and the forms of the narratives differ, but the social fact of having rules and forms does not. We realized that storytelling is a more expansive concept than disciplinary and topical divisions have allowed it to be. I think if more people are interested in storytelling right now, it’s because they have that same hunch.

Elizabeth Falconi: I would say that over the course of my research I was presented with and heard many different types of stories, some were presented more formally as “Zapotec folktales” while others emerged spontaneously in conversation. The similarities in stories that were presented to me as distinct in terms of genres, tellership and so on was very interesting to me, and which I discuss on pages 174-177 in my own chapter in the book. This perhaps answers your question about how to approach storytelling holistically. My attention to different storytelling episodes of the same teller (here Isidro) was another way to approach the analysis of this practice holistically. Storytelling is an ingrained practice in a wide variety of cultural contexts, and paying attention to this analytically I can help students and scholar develop an awareness of the role such practices play in socialization, relationship building, and the inter-generational transmission of knowledge, helping us to break down barriers between cultural groups associated with “oral versus written” traditions and so on.

Dilara Inam: Without the expected genres to talk about narrative practices, it becomes a very broad topic which discussed in a well-organized way in your book. We see 12 different case studies surrounding the discussions on narrative practices organized under three main parts which are Boundaries of Self, Negotiating Heritage and Constructing Discursive Authority. How did you end up deciding to structure the book?

Kate Graber: Yes, we specifically did not want to use the expected genres to organize the book, because the different case studies really tack across those genres to  probe the social and cultural significance of genres more holistically. We found so many exciting researchers coming from different disciplines, and studying different geographic contexts and speech genres, whose research was nonetheless animated by similar questions and concerns. So instead, we organized the book around the questions that all of the authors are addressing: What do stories, as a form of narrative practice, do? How do humans use them? Each of the three main parts of the book provides an answer: They are means for establishing and maintaining the boundaries of the self. They are means for negotiating heritage. They are means for constructing discursive authority. The three parts build up from a smaller unit (the individual) to larger units (regions, nations, and institutions), but in practice the three parts of the book aren’t really discrete. Most of the authors were in conversation with each other for several years, and the process of coming to this structure was very iterative.

Elizabeth Falconi: We mean for the structure to show how these different case studies, drawn from radically different parts of the world, work together to deepen our understanding of the role of narrative in the human experience. We also wanted to provide a kind of road map that would assist readers and educators in how they might use the book as a whole or in part.

Kate Graber: Yes, we had a pedagogical goal here. We had upper-level undergraduate and graduate students in mind as we compiled and edited the volume. Of course, although we organized the volume this way to make a theoretical point, the chapters examine narrative forms that represent some of those more “expected genres,” so you can find those in here too. (They are: Mapuche medical narratives in Chile, personal narratives among Yiddish heritage language-learners, counter-narratives of Taiwanese Buddhist monastics, coming out stories on a college campus in the United States, family laments in the Maniat region of Greece, Buryat-Russian television news stories in Siberia, and Zapotec folktales in Mexico.) In the introduction, which is written in part as a literature review, we discuss the more expected genres—traditional storytelling, folklore, narratives of personal experience, narratives of events in everyday life, “small” stories, and son—as they have been regimented in scholarship.

Dilara Inam: Also, what can you say about the blurred lines between these parts that you decide on? Can we evaluate Isidro’s stories which construct a persona under the self-creation part, for example? Or, can we say that stories are also creating community in addition to self since it is also giving others a story to tell?

Elizabeth Falconi: Our intra-volume framing essays were designed to do precisely this to blur the lines between the sections of the book to show that one’s individual narratives indeed shape communities’ understandings of themselves and that collective tales can be appropriated to tell individual stories.

Elizabeth Falconi: I am unsure about how to unpack this question, so here goes: in terms of the use of “practice”and “practices” as a way to understand the diverse uses of narrative explored in our volume, I think the goal is primarily  an outgrowth of phenomenological influences within the discipline of linguistic anthropology that encourage us to pay attention to the intertwining of sensorial experiences and our spoken, written, or signed renderings of those experiences. Practice-oriented approaches are often also used as a shorthand for paying close attention to details of interaction and social context.

Kate Graber: I would say that this observation about the interdependence between self and society animates every single chapter, albeit to different extents and in different ways. All of the case studies treat stories as socially, collectively co-constructed in interaction. Take Part I, Boundaries of the Self, for example. College students coach each other to create more compelling coming out stories, in Stephen DiDomenico’s chapter. Buddhist nuns try to head off negative stereotypes in their autobiographies, in Hillary Crane’s chapter. Those cases are about constructing discursive authority in LGBTQ communities and negotiating Taiwanese Buddhist heritage as much as they’re about the self, and the authors deftly show how what appear to be narratives of personal experience are deeply intertextual with, and responsive to, other, bigger cultural stories and frameworks.

Dilara Inam: It is not enough to say this book is only about narrative practices. In each chapter, we see how methodology plays an important role for the narrative practices. While we -as readers- learn a lot about what people do with the narratives, we learn how researchers approach or access these narratives such as person-center interviews and explanatory model interviews. Was that an intentional choice to include these specific studies including diverse methodologies or did you choose the topics and these various methods came after that unintentionally?

Elizabeth Falconi: Ye,s it was intentional to include a wide range of methodological and theoretical approaches to collecting and analyzing narrative practices, together with globally and contextually diverse examples of such practices.

Kate Graber: Yeah, I think Lizzy nicely unpacks an approach that we almost take for granted in linguistic anthropology! Even if we’re ultimately interested in questions of psychology or cognition or human universals, we study what people do, and what they say about what they do, as our primary data. As a group, the contributors to this volume use what I would consider a performance approach, in that everyone attends to audiences (both proximal and distant) as well as speakers/performers. That said, many of the authors in the volume do not self-identify as linguistic anthropologists. They come from, and draw on, a range of allied perspectives in anthropology, folklore, linguistics, and media and communication studies. As we point out in our introduction, these are all fields that are centrally concerned with stories both as sources of data and as interesting human practices worthy of attention in their own right. So attention to practice helps theoretically and methodologically unite these (otherwise sometimes disparate) perspectives, and that is another reason it is so prominent in the book. All of the authors provide a real ethnographic richness, not just as interesting background, but as the co-text and context necessary for making sense of the stories and their emergence in interaction.

Elizabeth Falconi: Well I think that telling with and telling to can co-exist, but that the main point here is that the person ostensibly being researched can often re-purpose an interview to their own ends and to ensure that a certain kind of story is told or foregrounded. Certainly researchers goals often differ from those of their research participants, which is why Charles Briggs’ volume Learning How to Ask was so important, because it helped researchers to see that they needed to pay attention the kinds of question and answer routines that were considered appropriate within their research contexts and the kinds of stories that were culturally appropriate to tell in various settings. Such insights are invaluable when encountering reticence or a perceived lack of cooperation among one’s participants.

Kate Graber: Honestly, the alternative idea that a story is some kind of fixed text that can be told only to someone, without regard to that audience’s demographics, linguistic knowledge, cultural knowledge, uptake, and so on, is pretty weird. Paying zero attention to audience would make for a really crap storyteller—or communicator in general. I mean, we didn’t answer your questions in this interview in Zapotec and Buryat. There’s always already a “someone” to whom, with whom, and for whom a story is being told. Including the readers of the CaMP blog, for this book.