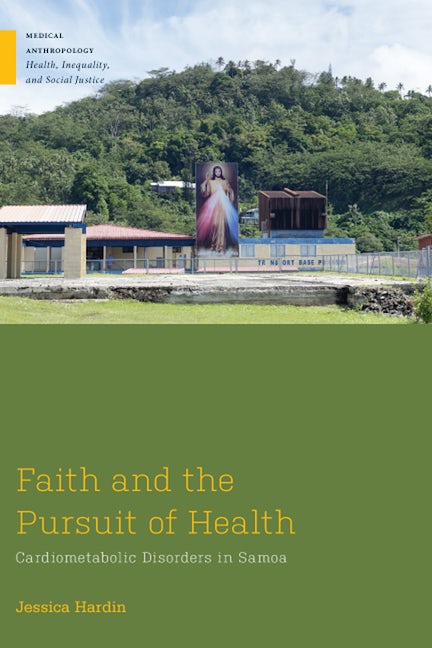 Courtney Handman: Can you give a brief overview of the main theoretical and ethnographic issues that you discuss in Faith and the Pursuit of Health?

Jessica Hardin: Through fieldwork I came to see the relevant questions to ask about cardiometabolic disorders in Samoa were not about diabetes or hypertension directly but instead about people’s religious lives. The book then developed around these kinds of questions: How do people make sense of sickness through their religious lives? What makes health itself a Christian pursuit? How do critical Christian practices come to bear on questions about who gets sick and why? Overall the book is an effort to understand the everyday ways I saw Pentecostals interpreting and intervening on widespread experiences of a cluster of cardiometabolic disorders from diabetes to kidney disease. Ultimately, they interpreted the rapid emergence of these disorders as evidence of the human causes of sickness, calling forward a need for salvation for individuals and the nation.

This piqued my interest because medical anthropological approaches to chronic illness have one consistent through line: structural causes, what Pentecostals saw as human created structures, are erased by enduring discourses and practices in biomedicine that reinforce notions of individual responsibility and autonomy. In Samoa, as people managed these disorders, though, they were highly aware of the environmental and structural impetus of widespread chronic disease. So what made that possible?

The book draws from medical anthropological approaches to embodiment and chronic illness with approaches in the anthropology of Christianity to conversion and critical practice to answer these questions. This analytic intersection provided me new ways to understand how Pentecostals constructed chronic illness as a Christian problem, in turn craving social pathways to change the everyday environments that they saw as causing their chronic illness. By moving these problems out of the clinic and into the church, sickness became a problem of faith, not individual will. In turn the everyday management of these disorders became linked to religious solutions, becoming actionable in ways otherwise not possible in day-to-day life.

The intersection in analytic premises in medical anthropology—that people are experts in the social causes of sickness—and the anthropology of Christianity—that Christianity is a critical practice with linguistic tools for examining human interference with God’s providence—made it possible to see how the moral pursuit of health is integral to the moral work of crafting Christian subjecthood. This argument builds on your work in Critical Christianity by examining how these critique practices are embodied. The ethnographic stories focus on how people identify that which stands in the way of a direct relationship with God by paying attention to the minutiae of bodily change.

This approach centers on how the changing qualities of the body, registered in stress and hunger or spikes in glucose or blood pressure were instructive; they revealed social causes. They were talked about and reflected upon in daily efforts to feed, heal and care for others. I call this embodied critique. Pentecostals developed a particular vocabulary for the changing body, teaching people to see the metabolic fluctuations in their bodies as evidence of fluctuations in their faith—showing the salvational logic of metabolism.

Samoa was an excellent place to explore this kind of theoretical approach because of the historical meanings associated with dynamic materialities. In Samoa, materials like food and fat move through the body and land, and in doing so, materialize in bodies the very hierarchies that direct those materials. Samoa is a place where large bodies have conventionally indicated that depth of one’s social world, indexing fecundity and the power to direct resources through the land into bodies. The large body was also a still body, one that was dignified by its inaction as this indicated the simultaneous labor of others. It was this ontological frame that led me to study Pentecostals because of the ways they articulated materialities as instructive and critical resources for understanding their changing world.

From the perspective that materials are evidentiary I began to see how the onset of widespread cardiometabolic disorders brought into question the everyday analytics that people employed as they interpreted people’s actions, and their bodies, in their day to day lives. When food and fat have historically “told” people about the depth of their relations and the landscape of rights and responsibilities, when fat became more evenly distributed and the dense foods of privilege (like sugary, fatty, salty objects) more easily available, how did people understand the meanings of bodies? Or the daily negotiating of endemic hierarchies? Or even spiritual authority?

Courtney Handman: You talk about the temporality of conversion in ways that are rather different than a lot of other anthropologists of Christianity, where conversion as an event is either not much addressed or is reported by one’s Christian interlocutor as something that happens in an instant. A lot of that analysis is rooted in your focus on Samoans’ experiences of health or illness. How does your focus on health affect the way you approach Christian temporality?

First, the intersection of conversion narratives and illness narratives—what I call embedded narratives—were stories told again and again. Their performative capacities—to create a saved identity, to create a sick role—merged in ways that affirmed the choices people made each day, offering them new ways of acting in the world. So while they were crafting a subject position—the individual speaking subject that we know from scholarship on Christians—and the person living a life changed by sickness—they were also domain shifting. In other words, by articulating an illness event as the precipitating event for conversion, pathways towards healing became evident. These pathways were otherwise difficult to parse in day-to-day life in Samoa—given those structural and environment factors that making avoiding or “controlling” diabetes, for example, feel nearly impossible. When these narrative conventions merged, the “befores” and “after” became less significant than the on-goingness of faith practices, and ultimately healing.

Healing was the second place where I saw that the temporality of instantaneousness, that we associate with Pentecostal healing. Instead I followed the accompanying temporalities that were more mundane that made the temporality of miraculous, perfect healing possible through everyday work of managing the body. This was particularly evident when studying cardiometabolic disorders like diabetes because they could not be vanquished in an instant—they ontologically challenged the notion that healing is complete and perfect. These sicknesses persisted over a lifetime. So then, how could people be healed if their diabetes persisted? When I started asking people about this paradox, they positioned healing as the unremarkable everyday work of avoiding particular foods, using money in new ways, or removing sources of stress and anger that sparked spikes in glucose or blood pressure.

Ultimately, these kinds of temporalities showed me that the instantaneous performative temporality of conversion and healing was accompanied by more invisible temporalities that were crafted by (mostly) women as they helped people come to embody a saved or healed subject position. Friends and healers taught new converted people how to speak, interpret their bodies and develop stances towards family that were seen as the source of suffering. They taught an embodied analytics—new ways of interpreting dynamic change in the body as a reflection of their faith.

The temporality of instantaneous conversion then was accompanied by the everyday work of helping people live within those worlds that were supposed to be radically different, and yet people didn’t know exactly how they should be different. The work of healing diabetes was then as much about imagining a path towards regular pharmaceutical use as texting with a group of women when stressful family situations arose or praying for one’s alcoholic father. These moments seem disconnected from diabetes, given that global discourse around diabetes focuses so heavily on diet and exercise. Yet the struggles that people associated with diabetes, the situations that needed healing were about feeling stressed and angry, dealing with the constant search for cash in an environment where opportunities to earn enough were few.

Instantaneous conversion authorized people to seek different kinds of relations, to speak differently and to use their money differently. Living with diabetes similarly required people to live in their worlds and bodies differently, eating differently, directly resources to medical care, developing physical activity routines. The work of healing was in crafting those different worlds.

Courtney Handman: What are your currently working on? How does your current work connect to Faith and the Pursuit of Health?

Recently, I’ve developed a couple of organic leads from this work. When doing this work I occasionally came across people who had undergone amputation related to diabetes and constantly met people with skin infections on their feet and lower legs related to neuropathy from diabetes. At the time I didn’t feel like I could work with people undergoing these dramatic changes because these were extraordinarily difficult transformations for people and their families to undergo. Now, I see that their experiences are often invisible in the larger literature on diabetes and certainly in diabetes interventions in Samoa. This got me thinking about the ways that health promotion, with its relentless prevention discourses, might be a driver of complications. When I did some pilot work on the topic I found that most people didn’t associate the conditions that precipitate amputation—that is skin infections or numbness—with diabetes. So, this new project takes on the question of the limitations, and potential deleterious impacts of prevention frameworks, using temporality to probe this question.

The other project I’ve just begun is working in the London Missionary Society archives, as these were the most influential missionaries in Samoa, to consider how missionaries were essential actors in creating the food systems of Samoa, crafting markets as integral to the functioning of missions. This historical angle is new to me, but I hope provides insights into some of the paradoxes involved in creating a decent meal—using Hanna Garth’s words—in Samoa today. What I’m also finding is a cultural text of conversion related to sickness, death and illness—as (at least in the late 1840s) missionaries saw these existential moments are some of the most productive for creating “sincere” conversion.

What a pleasure it is to dialogue about my book, especially with you, because your theorizing on “critical Christianity,” which helped me make sense of what I saw happening in day-to-day life in Samoa.