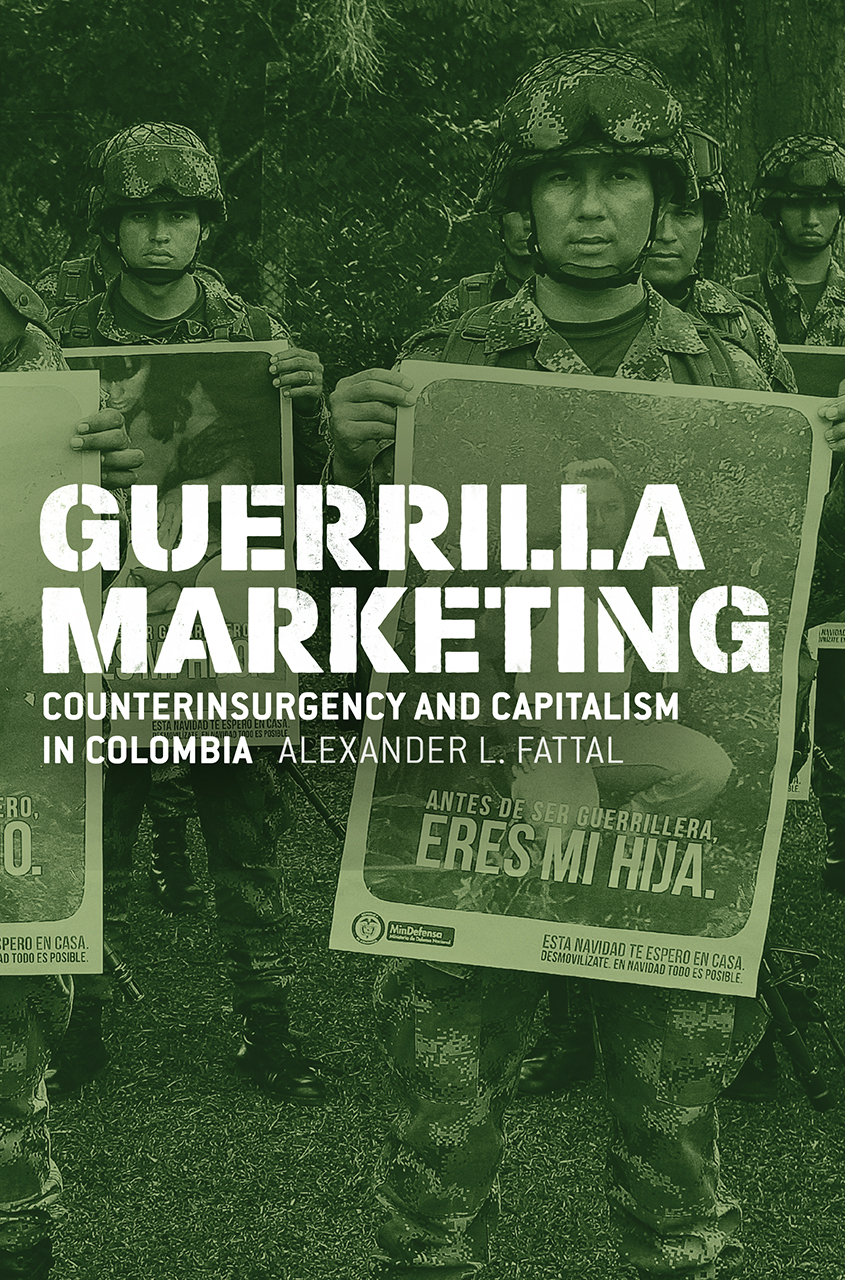 Winifred Tate: The title, Guerrilla Marketing, evokes advertising, and in fact Amazon lists a number of similarly named advertising books. Why did you choose it?

Alex Fattal: Because it’s dense, evocative, and slippery, like the book’s contents. In a sentence, the book is an ethnographic analysis of the feedback between marketing and military strategies, how each set of experts are learning from the other in their respective efforts to conjugate furtive research, surveillance, and planning with spectacular media interventions. Guerrilla marketing, the term, references a set of trends in the private sphere to camouflage the advertisement; and as the title of my book, it references how the state is marketing a new life of consumer citizenship to guerrillas — the book’s ethnographic ground. The book documents a mashup of these worlds, which the title encapsulates.

Winifred Tate: One of the central arguments you make is that programs that are marketed by governments and consultants as humanitarian and contributing toward peace often, as in this case, involve policing, surveillance and frequent detention of targeted individuals — that is they employ a logic of militarization and ongoing warfare. Can you explain the Colombian case you examine?

Alex Fattal: The program that I studied in Colombia, the Program for Humanitarian Attention to the Demobilized (PAHD), is a special initiative of the Colombian Ministry of Defense. It began in 2003, the year after peace negotiations between the Revolutionary Armed Forces of Colombia (FARC) and the government fell apart. It was in lieu of a peace process and sought to coopt the language of peace policy by “demobilizing” fighters that were really defecting or deserting. It might strike some readers as a picky semantic difference, but one of the key claims that I make in the book is that the temporal difference between war and peace — like other modernist distinctions — matters and should not be relinquished lightly. At the level of academic critique, we see how the two bleed ineluctably into each other, but I do think there is something worthwhile in not giving into the Marshal McLuhan’s prognostication that World War III will be “a guerrilla information war.” His vision is proving increasingly prescient with the confluence of the unfolding of the Global War on Terror and the technological moment, and it’s very troubling to say the least. By theorizing what I call “brand warfare” I am trying to articulate something that is in global circulation. While it’s been interesting to share the work and hear from colleagues about how they find the concept useful in their field own sites, it’s also been disheartening because it points to a troubling tendency toward dangerous new forms of mass manipulation.

Alex Fattal: It is part of Colombia’s striving to position itself on the upper rungs of a global hierarchy of security expertise and establish itself as a country that has come back from the brink of “failed state” ignominy, and therefore has knowledge to export. The pony show of the “South South Tour” (which was mostly funded by the global north) was just one piece in a wider re-narration of the nation and served as a performative intervention to create the impression of the government having “solved” the conflict — all while the war was still raging. Kimberly Theidon has aptly described this cunning temporal conflation as “pre-post conflict”. The bi-annual South South Tours were part of the Colombian government’s “mission accomplished” moment, a performance that involved the mobilization of state symbols, bureaucracies, and resources. Anybody who has been following the post-peace accord violence knows how utterly premature such triumphalist projections have been.

Winifred Tate: An important contribution you make is bringing an analysis of the intersections between the worlds of marketing and branding, and government demobilization efforts. How do these bureaucrats and consultants try to sell peace? How do you think these campaigns have contributed to the current skepticism about the peace accords in Colombia?

Alex Fattal: You are very right to point to skepticism as the other side of the coin in such strategies of affective governance. Quite simply, I think the government blew its credibility on peace initiatives during wartime to gain a military and political advantage. When it came time to persuade the Colombian public that a strikingly similar set of programs would be necessary during negotiations with the FARC in Havana from 2012 to 2016 and then during the plebiscite and implementation of the peace accord, it was much easier for the right wing to sew doubt around the motives of the pro-peace camp. It is a telling case of how the right-wing benefits from playing politics amidst a hall of mirrors, unphased by distortions and shameless in taking the non-correspondences between signifier and signified that Baudrillard poignantly highlighted when discussing consumer culture decades ago to its logical conclusion — outright disinformation.

Winifred Tate: A growing number of anthropologists are conducting ethnographic research within government and military bureaucracies. What lessons can you share for anthropologists and others who want to do this kind of research?

Alex Fattal: Be careful. It’s a fraught field and the rules of the game are in flux. Journalists and academics are in a tough spot across the globe. Ayše Gül Altinay, among others, is being arbitrarily detained in Turkey. The translation of Guerrilla Marketing into Spanish and a few promotional events in Colombia seem to have earned me my first death threat, a picture of a man hanged and tortured that was sent to my Colombian cell phone. (It was a new SIM card and I had hardly shared the number with anyone). Institutions, like the Colombian military, that project such a powerful image of themselves publicly are often hypersensitive and don’t deal well with criticism and they have a kit of repressive tools to use as part of the brand warfare they wage to sure up their often shaky legitimacy. I did my best to convey the scope of my research and its disposition to critical analysis, but despite my best efforts to communicate openly and continually — tensions arose. Embedded ethnography tends to assume an ideological affinity between the anthropologist and her field site, but when that’s not the case things can get tricky. One of the parts of the book that I am proud of is the “Access and Ethics” section of the introduction, which digs deeper into these dynamics.

Winifred Tate: In addition to your analysis of the logic of the demobilization programs, you offer complex and fascinating glimpses into the complexity of ex-combatants’ lives through life-history excerpts in-between each analytical chapter. How do you understand the role and importance of these testimonies of lived experience?

Alex Fattal: The testimonials, which are accompanied by Lucas Ospina’s wonderful drawings, do a lot of work in the book and they have been one of the elements that has really impacted readers so far. They give the analysis another dimension by bringing the discussion down to the level of everyday life, not in a way that is illustrative of my interpretations but rather in ways the exceed the interpretative frame, allowing readers who are unfamiliar with the Colombian context to feel the intensities and trajectories of lives marked by the conflict and their many layers. The stories also open a space for readers to make connections to the chapters — the placement of each of the testimonials is not haphazard. I think the testimonials widen my otherwise narrow focus on the convergence of marketing and militarism and allow the book to be about much more at the same time. Including them also relieved some of my sense of guilt about not being able to include many other stories that I wanted to include. So many former guerrillas shared their life experiences with me and I wish I could have included their stories too. My editor, Priya Nelson, did a wonderful job gently influencing the manuscript. The one piece of advice I just couldn’t take was to cut the testimonials down further. For me, I wanted to make sure the arc of often-difficult childhoods, joining the guerrilla, life inside the FARC’s ranks, the decision to leave, and the challenges of reintegration came through; and it was hard to abbreviate that arc, especially with so many compelling stories.

Winifred Tate: Similarly, your film Limbo, centers on the recounting of one such story. What is the film about?

Alex Fattal: The book could have easily been twice as long, but I left some large pieces out, such as a chapter on the psychological world of ex-combatants and their dreamscapes. I decided to spin that off into a short film called Limbo, which was shot entirely in the back of a truck that I transformed into a camera obscura. The article I am writing now is about former guerrillas’ dreams and the film project as a form of ethnographic surrealism, which strives for a dialectic between the ethnographic impulse to render the familiar strange and the surrealist impulse to render the strange familiar. The film, unlike much of what has been featured from the Sensory Ethnography Lab, takes narrative seriously, while also creating a sensorial space in the back of the truck. The truck becomes a confessional, psychoanalytic space that, unlike the couch, is in constant motion. The idea is to take the viewer on an oneiric journey through one former guerrilla’s life. Like the testimonials in the book, the film shows how the aftermath of being in the war lingers, it is an aftermath that is accentuated by a form of demobilization that, as I argue, is often complicit in the remobilization of former combatants, fueling cycles of conflict and peace policy that Colombia has been in the throes of for the last thirty-five years. It’s a trend, that sadly, is continuing through the post-peace accord present.