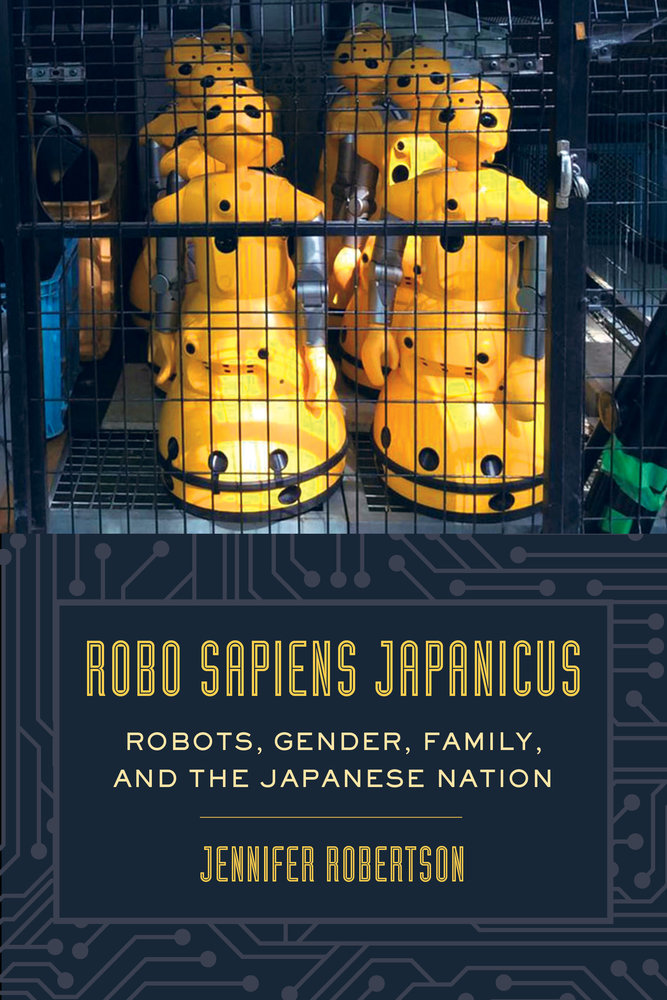 Daniel White: In addition to the variety of topics you have explored in Japan over your career, you have been researching and writing on robotics for more than a decade now. Given your work has long been noted not only for its archival rigor and ethnographic attention to detail but also for its accessibility, could you outline how you might describe this book’s main arguments to an audience full of the many roboticists you have spoken with over the years? Would you add anything else in addressing your anthropology colleagues once the interlocutors had left the room?

Jennifer Robertson: My address to roboticists would be the same with or without anthropologists in the room, for the reasons that my book is aimed at a broad readership inside and outside of “the academy,” and that—at the risk of appearing immodest—all parties, roboticists and anthropologists included, could benefit from my observations. A key point I make several times in Robo sapiens japanicus (RSJ) is that roboticists and anthropologists researching robotics alike must guard against contributing to hyping gee-whiz robots and to exaggerating the virtues (and vices) of artificial intelligence. With perhaps the exception of iRobot’s Roomba and industrial robots already installed in factories, most robots aimed at non-military consumers are one-off prototypes and not viable, much less reliable, products. Amazing robot videos are heavily edited and speeded up, and the scenarios do not represent real-world conditions and applications.

Just this past month, articles and editorials have appeared in leading robotics journals that provide a reality check for roboticists. To summarize: overselling robot capabilities has proved to be a dangerous strategy resulting in the very recent shutting down of a number of companies whose robots were celebrated in the past several years as revolutionary household appliances. Jibo—Time magazine’s “Best Inventions of 2017”—mentioned in my book, was crowd funded on Indiegogo (for nearly $4 million) but the eponymous company never delivered their product and closed out this year. Roboticists (and, I might add, those who research, study, and write about robots) need to admit their failures and to reflect on how to learn from them.

Daniel White: In the book you explore how “robots tend to both mirror and embody state and corporate ideologies and priorities” (p. 82). Can you discuss some of the ways these state ideologies contribute to the gendering of robots, especially considering how Japanese roboticists have long embraced theories and design strategies that explore intelligence as a necessarily embodied phenomenon?

Jennifer Robertson: You’re asking two different questions: state/corporate ideologies and embodied intelligence. First of all, we should not assume that technology per se is liberating; technology can provide certain freedoms, but it can also be experienced as repressive and even alarming. Technology and robotics are not neutral fields. They are infused with values that transcend their usefulness and convenience. Because robots are very complex, very expensive machines, state and corporate funding is crucial for their development, and thus robots tend both to mirror and to embody state and corporate values, ideologies, and priorities which are conservative and tend to reinforce the status quo. As a sidebar note—robotics in the US is heavily supported by the Department of Defense, and today in Japan, robotics are incorporated into the lucrative weapons economy.

Embodied intelligence, as I elaborate in my book, refers to a dynamic coupling of a robot with its environment. Home/personal robots are envisioned as co-existing with humans in spaces designed for the human body, thus they should resemble humans. Among roboticists across national/cultural areas, there is a consensus that intelligence (however that is defined, and there are many working definitions) cannot exist in an abstract form but requires a material body. That material body is almost always gendered, and the gendering of robots is contingent upon what role the robot (humanoid, in this case) is imagined to assume. Since many human roles are gendered, and since most roboticists take for granted the sexual and gendered division of labor—females as homemakers occupying a domestic space, males as breadwinners occupying a public space—their robots are also gendered from the start at the design stage. In short, roboticists (the vast majority of whom are males who have neither taken classes in gender studies nor questioned the social construction of gender) inscribe and reinforce in their creations the binary sexual and gender(ed) status quo that remains for them self-evident. Even gender-neutral robots like Roomba tend to be named and gendered by their owners.

Daniel White: You survey a number of ways that both robotics engineers and government officials imagine harmonious futures of people living intimately with robots, a notion that strikes some people both inside and outside Japan as somewhat creepy. However, particularly in your analysis of Masahiro Mori’s famous notion of the “uncanny valley,” you suggest that people exhibit a capacity to adapt rather quickly to any “eerie” feelings they may initially feel toward a robot. Can you say more about Mori’s concept and what your reading of its temporal dimensions implies for the politics of human-robot interactions in Japan and perhaps beyond?

Jennifer Robertson: As I explain in RSJ, what is uncanny about the “uncanny valley” is how this idea has been misunderstood! Mori came up with the idea of bukimi no tani (“eerie-feeling valley”) in 1970 before the production of humanoids. In a nutshell, he proposed that a woman (he deliberately chose a female protagonist) who shook someone’s hand not knowing it was a life-like myoelectric prosthetic, would scream and freak out once she realized that what she assumed was flesh and blood was not. Mori drew a graph that hypothesized as a “valley” the shock of realizing that something one was convinced was an ordinary human was actually an animated mannequin. Subsequently, “uncanny valley” emerged as a condition to avoid in designing robots and was also appropriated by literary critics who grafted the concept onto Freud’s thesis of the uncanny (about which Mori knew nothing). As I argue, even if said woman screamed upon squeezing a prosthetic hand, she would quickly recover—in seconds. We humans encounter differently-abled, “differently” appearing bodies all the time, and quickly adapt to an enhanced “normal.” Perhaps ironically, Mori, who was a teenager during WW2, seems to have forgotten the disabled veterans in his midst, many of whom were fitted with prosthetic limbs. The literature debunking the earlier “natural law”-like acceptance of the uncanny valley hypothesis is now quite extensive.

Daniel White: In the text you skillfully weave together histories of technology, the life sciences, and art in illustrating how the boundaries between artificial and “natural” life in Japan are differently drawn. For example, in your discussion of the biologist Makoto Nishimura’s famous “proto-robot” Gakutensoku in 1928, you suggest that many scientists in Japan have long held the attitude that robots and humans exist “in a network of animate entities” (p. 13). This point seems critical to your broader discussion on how cutting-edge technologies can actually serve in the reproduction of tradition. I wonder, then, what happens to this particular cultural attitude as it comes into contact with certain globalizing aspects of robotics research and design in Japan, especially as researchers in Japan increasingly collaborate with students and researchers from abroad?

Jennifer Robertson: Should “something” happen? The spiritual/existential orientations of individual roboticists, from Shintō’s animism and Buddhism’s moral system, to the Abrahamic monotheisms of Judaism, Christianity and Islam, do not seem to affect the ways in which they collaborate in the laboratory. What inhibit “global” intersections and synergies are the constraints imposed by, to use an ever relevant phrase, the military industrial complex (aka the state). Moreover, collaboration with non-Japanese researchers (in Japanese and foreign laboratories) can yield innovations that can be applied and adapted to Japan-specific conditions and needs.

Daniel White: Your ethnographic writing style has been incredibly consistent over the years, characterized, as you describe, by a “reticulate aesthetics” that is “eclectic, genre-crossing, discipline-crossing,” and held together by a coherence that “comes from the interlaced elements and not via the superimposition of a particular theoretical edifice” (p. 31). Given your own training in art and art history, as well as your illustration of how roboticists integrate artistic elements from manga, anime, and theater into their own design practices, were you ever tempted to experiment in terms of ethnographic design, such as by incorporating some of your own artwork? Could you discuss what role you see for artistic experimentation in today’s practices of ethnographic writing and the communication of anthropological research?

Jennifer Robertson: I see myself as creative in identifying and demonstrating montage-like linkages that generate a new awareness or interpretation of events and socio-cultural phenomena. That I am able to do so is because I have accessed and amassed over decades of rigorous, interdisciplinary research, lots of ethnographic, historical, literary, image-based, and musical data and media that are instrumental in crafting comprehensive backstories and generating manifold “dots” to connect. Among these data and media are artworks that evocatively address and redress the role(s) of technology in society. Thus, in RSJ, I refer to the work of Japanese feminist artist Miwa Yanagi (specifically, her photography series Elevator Girls, 1994-1999) and Korean-American artist Nam June Paik’s Robot K-456 (1964-1982). I do not simply include artworks as self-evident or as mere illustrations, but as a non-textual mode of interrogating, in this case, social applications of robotics and human-robot interactions. I did include one of my own collages in a recent article (“Looking Ahead by Going Back.” Anthropology News website, July 18, 2018) to illustrate Prime Minister Abe’s imagination of the future Japanese extended family, including its robot members. The bottom line for me (or my “approach”) is my fiduciary responsibilities as a scholar. I have always initiated a research project based on my experience or fathoming of rhetorical, expressive, local dynamics that intersect in ways to form distinctive patterns which inform the structure and content of a book or article. I do believe that there is a lot more that anthropologists can do to experiment with various literary strategies in crafting their ethnographies to create more dimensionality and texture in their description and (re)presentation of local phenomena. These include montage—my own use of which was informed by John Dos Passos, whose U.S.A. trilogy (1938) I read while writing my doctoral dissertation—as well as various typefaces and fonts, popular lyrics, and a variety of images from which information is extracted, to name a few. Reading more literature and less social science is critical in learning how to craft an ethnography!