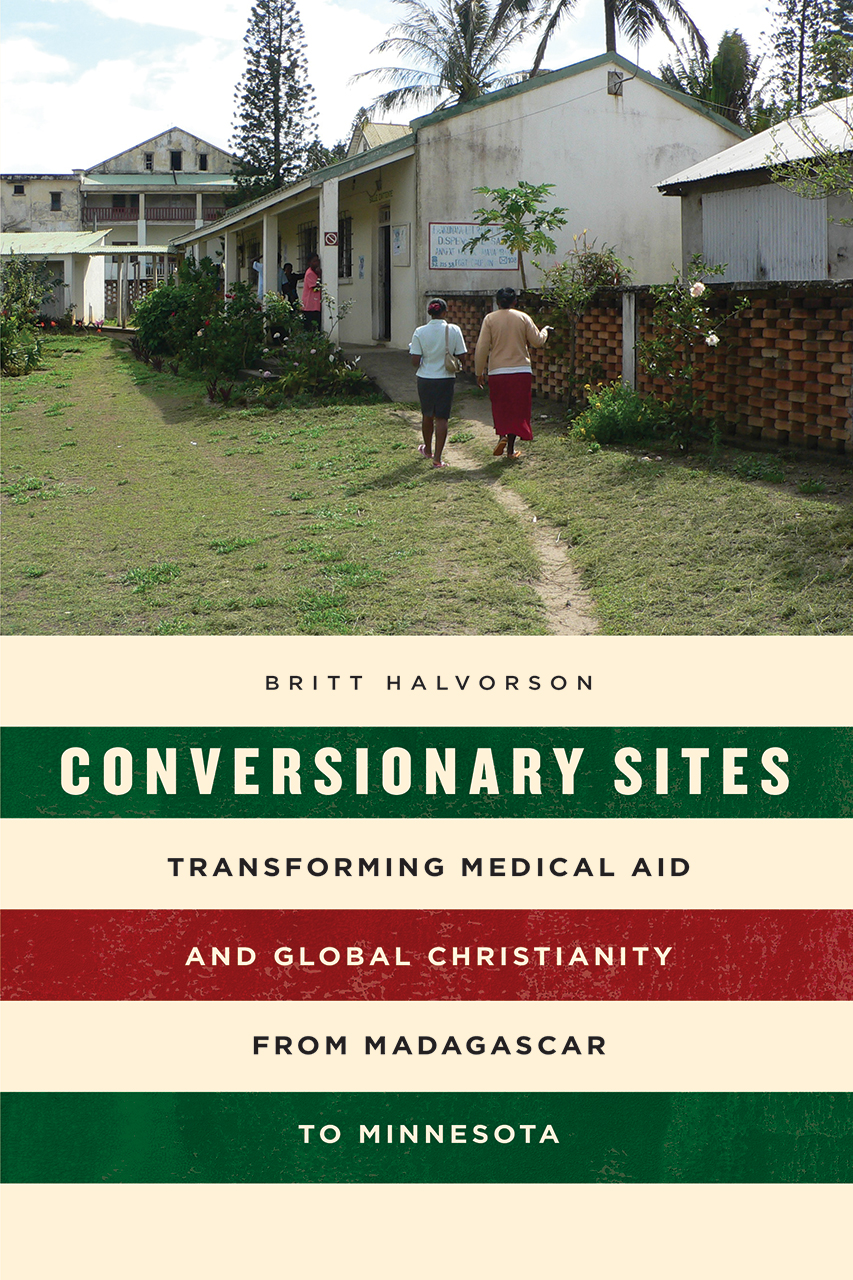 Josh Reno: What were your primary goals in writing this book?

Britt: Halvorson: One of my goals in writing this book was to shine light on the transforming relationships between independent national churches in Sub-Saharan Africa and American Christian churches formerly involved in colonial mission work. Humanitarian aid relationships have become one way that Christians increasingly attempt to “do good in the world” and address forms of inequality among Christians. Some characterize humanitarian aid programs as more ethical practices than previous colonial missionary work because they do not appear to interfere with the authority and sovereignty of African churches. I critically explore such programs and their claims by asking how variously positioned Christians understand their moral and political dimensions. I also look into how humanitarian sensibilities are transforming people’s practices and perceptions of global Christianity.

Another goal in writing the book was to highlight the interpretive process and diverse valuations that occur through the material work of doing Christian aid. I have encountered studies of aid that smoothed out these activities or left the impression that aid workers operated similarly to fulfill organizational missions. Through my own aid labor and relationships with Christian aid workers in Minneapolis and Antananarivo, I experienced things differently: both Malagasy and American aid workers continually debated, imagined, and reflected on what doing aid meant and how they were implicated in that process. Medical technologies like x-ray machines were not static or single things per se but accorded varying meanings and values; aid workers pursued their relationships with God and each other through their aid labor; and a variety of absent presences pervaded aid activities, from the specter of colonial missionaries to a desired holism of body-soul not found in biomedical treatment.

This insight led me to the deeper realization that Christian aid-giving is a process of religious interpretation. So I wanted to fill my account of aid with all the lived struggles and beautifully fraught moments of aid spaces. I wanted to show people “making do” among varying value systems in a kind of dynamic, improvisational ethical practice. What I mean by that is that doing aid—whether sorting donations of surgical scissors or writing reports on the uses of medical relief—shapes varying positions, critiques, interpretations, and ethical problems of global religious community. Medical supplies like syringes and bandages can operate as forms of religious mediation, much like the films, cassette sermons, monetary donations, clothing, and much more described in other anthropological studies of religion. The material and bureaucratic practices of medical aid may seem dry and dull on the surface. But, as I hope to have shown, they are the very stuff of vital questions about what it means to be an ethical Christian in the contemporary world.

Josh Reno: In your analysis, conversionary sites play a key role as a way of conceptualizing how global medical aid changes as it crosses geographical distance, converting from one culturally meaningful form to another relative to religious sites and the practices and orientations of the actors involved. Can you describe what other work this idea performs in your analysis and what made it preferable to other possible approaches?

Britt Halvorson: I’ve used the term conversionary sites to draw out how Christian aid workers actively navigate the varying value regimes present in the Minnesota-Madagascar aid alliance. These include 1) ethical ideals of solidarity and mutuality among “global Christians,” 2) professional standards of accountability in bureaucratic humanitarianism, and 3) the resource inequalities of global medical commerce. Malagasy and American Christian aid workers constantly negotiate the asymmetries and gaps among these varying value regimes. This work is a key feature of the kind of Christian aid I studied and, I think, part of what makes it a meaningful practice for individual Christians; small uncertainties of value signal the creative leaps of faith that are central to Christian commitment. I consider conversionary sites to not only be the geographically-dispersed Christian aid spaces where I did research (aid warehouses, worship services, offices, house churches) but also the distinct material activities undertaken within those spaces. Aid laborers are not only seeking to, for example, morally redeem medical discards by praying over them or by associating “junk aid” with human sinfulness. Through the material transactions of aid, Americans and Malagasy involved in the aid program are also participating in an attempt to convert the moral foundation, ways of knowing, and practices of their prior relationship with each other under colonial missions.

Conversionary sites therefore enables me to draw out these shifting values of past and present and look into “conversions” as moral relations that take shape in, and receive reinforcement from, the material activities of aid. While American Lutherans (ELCA) were formerly involved in direct, face-to-face evangelism in southern Madagascar for over a century (1888-2004), individuals previously engaged in overseas mission work are now converting their own moral practice and moral subjectivity to be in keeping with an aid-giving sensibility that ostensibly upholds Malagasy authority and sovereignty. Likewise, Malagasy Lutherans’ relationship with American Lutheran churches has shifted over the last forty years to focus partly on financial grants and in-kind aid resources that sustain church-run institutions. For both projects, “the colonial” is a negative moral force against which contemporary Christian humanitarian efforts are being defined. I find this fascinating and relevant at a time when academics, too, are taking part in decolonizing efforts. I’ve observed that, when imperialism can be embodied in the figure of the colonial missionary and “the colonial” is easily named, less scrutiny is given to the more thoroughgoing cultural practices that less obviously maintain forms of racial and political inequality.

Josh Reno: Your ethnography examines the relationship of past colonization of Madagascar and present-day medical aid relationships, specifically the complicated and contested involvement of Lutheran missionaries in both. In what ways do varying temporalities become important to your analysis? Does this idea have relevance for other studies of humanitarianism, including those not focused explicitly on religious organizations?

Britt Halverson: This question fits beautifully with what I was describing above. I argue in the book that Christian aid work is a practice in time and of time. What I mean by that is that people doing aid—whether Christian or of another religious affiliation, or ostensibly secular—are often comparing their work to other possible approaches, including past interventions and relationships. These other possibilities come to inform and define present approaches to aid-giving in complex ways. In this respect, the relationship of past and present is always “present” in aid efforts! But the pasts evoked are creative, selectively made constructions that speak to the concerns of the present. I came to think of the relationship of past and present as an historical resource that Christian aid workers variously used to define a morally upright approach to contemporary Christian humanitarianism. Some Malagasy Lutheran informants spoke of the relationship of past colonial American Lutheran missionary involvement in Madagascar as continuous with the aid program, rather than representing a sharp break with the past (as did some Americans). Additionally, other Malagasy informants referred to the colonial as an affective experience of déjà vu that called forth a subtle critique of specific qualities of the aid program.

Recognizing the varying temporalities of aid work raises several interesting issues. One is the extent to which aid itself becomes a practice of historical reinscription, of reworking the past by defining present aid efforts as distinct from the practices of the past. This has the danger of downplaying the political and economic inequalities produced by Christian aid programs, as well as the thoroughgoing and very direct ways they build on specific Christian ties produced under colonial rule. A second question is how to connect these subtle ways that aid is a practice of time to the prevailing temporalities of aid described in the broader literature. Rather than intervening in a short-term crisis, the Christian aid program I study has been oriented around the much more enduring problem of economic inequality, which has no easily discernible end point. For my research participants, this long-term involvement raised questions about whether Christian aid programs addressing economic inequality should have an end or whether they constitute important, ongoing forms of world-making. But more secular humanitarian studies have certainly benefited from attention to the varying histories informing contemporary aid work. Attending to these questions on a finer scale—as I have tried to do—would mean looking into how relations of past and present constitute part of the ethical practice of humanitarian work.

Josh Reno: Biospiritual imaginary is a key term for portions of the book that deal with part-whole metonymy and synecdoche as evidenced and enacted through bodies. What kind of work does your term biospiritual imaginary do for thinking about aid as a semiotic and linguistic practice?

Britt Halverson: I’ve used the term “biospiritual imaginaries” to illuminate how aid work connects bodies, words and material things in particular ways that can be ideologically motivated. As is true for many, I was positively influenced in my graduate training at the University of Michigan by Judy Irvine and Susan Gal’s work on language ideologies and Webb Keane’s notion of semiotic ideologies. In addition to the rich literature on mediation in the anthropology of religion, I’ve also long been interested in multidisciplinary work on materiality and religious practice emerging from religious studies and art history.

These distinct influences led me to consider Christian aid as a semiotic practice with, in this particular case, notably partial, fragmentary and incomplete notions of authoritative practice. For instance, the Minneapolis aid organizations exist at the ostensible margins of authoritative Lutheranism. They are not affiliated directly with one doctrinal view of Lutheran practice, they feature Lutheran volunteers of many different denominations, and the ordinary practices of aid labor (e.g., sorting, handling, and packing medical relief) repeatedly emphasize the significance of material aid objects to Christian practice. Organizational leadership sought to discursively frame these material and embodied experiences in particular ways that supported authoritative views of Lutheran aid practice. Yet aid work often prompted serious play among laypeople concerning the relations of the medical supplies they handled to their own bodies and to unseen but imagined wholes, such as the global Christian body or the medical patient body.

Like other scholars in the anthropology of Christianity writing on ideologies, I aim to show how the interpretive work I’ve described as central to Christian aid work is always already “political” or ideological through the forms of agency, qualities and boundaries people variously draw between their words, material things, and bodies. I’ve wanted to demonstrate how aid practices are semiotic in this way, and to develop a fine-grained approach to the interesting, polyvalent ways aid work positions words, bodies and material things as communicative forms. Applying forms of linguistic and semiotic analysis to aid work can lead to new insights. The faith-based aid organizations where I did research are marginalized in their religious communities’ hierarchies of doctrinal and theological authority but are certainly not marginal to the religious experiences of laypeople. As such, aid agencies present an interesting space for tracking the creativity and multiplicity of Christian semiotic approaches and, even more, the necessarily partial and incomplete quality of a dominant Protestant Christian semiotic ideology.