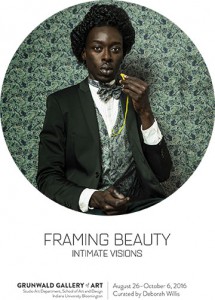 Consider four digital reenactments of significant portraits, a Moroccan Man, Frederick Douglass, Portrait of Citizen Jean-Baptiste Belley, and Juan de Pareja. These works by Dakar based photographer Omar Victor Diop are on view at the Grunwald Gallery of Art exhibition, “Framing Beauty: Intimate Visions.” [i] Throughout Project Diaspora: Self Portraits, 2014 Diop replaces props with equipment from the world of football (soccer)—a red card, cleats, goalkeeper gloves—in his reenactments of European paintings of travelers and migrants of African origin. Of these props he remarked, “I like intriguing elements in pictures.” For viewers, the incongruity of football gear juxtaposed with the time period of the original portraits unsettles the viewing experience, causing the viewer to stop and think. Why these objects from the world of sports and what story do they tell? If one of the defining problems of the 21st century is global migration, what does a long-term view from Africa offer?

This question was answered during the residency of Dakar based photographer Omar Victor Diop at Indiana University, Bloomington in September 2016.[1] His visit coincided with the exhibition “Framing Beauty: Intimate Visions” at the Indiana University Grunwald Gallery of Art (https://studioart.indiana.edu/grunwald/index.html) guest curated by Deborah Willis, University Professor and Chair of the Department of Photography and Imaging in the Tisch School of the Arts at New York University. The exhibition included 20 contemporary artists, including Omar Victor Diop, Bill Gaskins, Kalup Linzy, and Ji Yep who participated in a discussion moderated by Professor Deborah Willis. Taken together these artists regard the past, recreate portraits and re-staging beauty as a performative act.

The exhibition and events were sponsored in part by IU Themester 2016: “Beauty,” an initiative of the College of Arts and Sciences, and IU’s New Frontiers in the Arts and Humanities Program. The College Themester (http://themester.indiana.edu/about.shtml) engages the collective knowledge and creativity of faculty and involves undergraduate students in the study of ideas across the disciplines. The goal of this Themester is to reinvigorate considerations of beauty as a core component of the human experience across the span of time and in diverse scholarly, social and cultural settings.

Among the many amazing works in this exhibition are six digital photographic prints from Omar Victor Diop. Diop’s Project Diaspora series images are large scale, high resolution, and archival quality digital pigment inkjet prints. In Diop’s studio portraits, he poses as the original sitter, recreates the original clothing styles, and reenacts the original sitter’s pose, gesture, and expression. Diop created this body of work during a residency in Malaga, Spain, in 2014. There he was struck by the lack of attention and space given to images of Africans in western art institutions.

Artists based in Africa have been returning to the colonial archive to engage politically with a fraught visual past by revising and restaging that past, often using satire and wit. Visual artists based in Senegal are reimagining, reawakening, and reclaiming their visual past by mining multiple, fragmented, and heterogeneous archives of visual images by and of Africans. These troves include state, family, and personal collections from which contemporary artists such as Diop create new works. If Diop is reenacting the past through costume, he is doing so to become more deeply who he is, the argument put forward in Costume (http://www.iupress.indiana.edu/product_info.php?products_id=807489) by IU faculty member Pravina Shukla, and whose exhibition, “Costume: Beauty, Meaning, and Identity in Dress” also part of the Beauty Themester and currently on view at the Mathers Museum of World Cultures (http://www.mathers.indiana.edu/museumex.html).

Unlike journalistic and social documentary photography, which also has an activist agenda, studio photography allows Diop to tell the story of migration from a perspective of the long durée, beyond its contemporary moment of crisis. In his work, the images drive the story, rather than the story driving the images, which is often the case in photojournalism. So, rather than providing images of Africans crossing the Mediterranean in subpar wooden boats, he has chosen to mine the archive of art history. To argue that even the most venerated of African travelers, including professional athletes, still faces social exclusion and political persecution. They are in Diop’s words, like their forbearers, “rich but not really respected.”

Diop reenacts European portraits of Africans to confound past and present—image and object—and ultimately to pose uneasy questions about migration and African futures. In turning to the archive, artists like Diop are providing a historical framework through which to view what we think of as a contemporary crisis of migration, which has been captured by photojournalists and other documentary photographers.[ii] He places props from the world of football because he says that, “adding a contemporary element creates striking imagery, attracts attention, and places Africa in a contemporary context where we still struggle with racism and exclusion.” His visit to Indiana University comes at a time when the national conversation in the US about Muslim migration is characterized by cultural and political polarization. His intervention pushes us to view migration as a complex negotiation of global influences and personal desire.

Beth Buggenhagen is an Associate Professor of Anthropology http://www.indiana.edu/~anthro/index.shtml and African Studies http://www.indiana.edu/~afrist/home/ and a member of the NEMLIA collective, New Media and Literary Initiatives in Africa, http://nemlia.org/: at Indiana University. She is currently working on a book on the histories of African self-imaging and contemporary reinventions of the portraiture tradition in West Africa. She can be contacted at babuggen@indiana.edu.

[1] Diop’s residency was supported by the Institute for Advanced Study, the Office of the Vice Provost for International Affairs, and the Department of Anthropology.

[ii] For a detailed discussion of the notion of crisis in relation to the scholarship of the African continent see Makhulu et al. Hard Work, Hard Times: Global Volatility and African Subjectivities. (University of California Press, 2010).