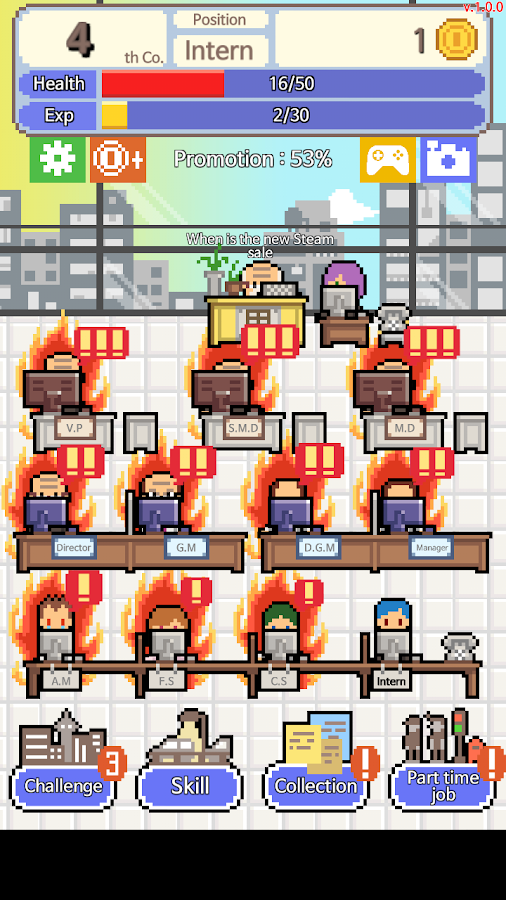 Figure 1: The basic layout of Don’t Get Fired. You start as an intern at the bottom and tap your way to the illusive top.  Image from the Google Play store.

At first glance, the mobile office survival game Don’t Get Fired seems like the 21st century version of the 1889 Parker Brothers game, Office Boy. Office Boy, a Horatio Alger story rendered child’s board game, provided anyone the fantasy of making it in society, by moving from office boy to Head of the Firm.[1] Don’t Get Fired gives iPhone and Android users the chance to experience the fantasy of modern promotion by moving from the bottom to the top (of the screen), in a 16-bit office world set in South Korea. But where Office Boy allowed a player to climb the corporate ladder by demonstrating virtue, Don’t Get Fired depicts the arbitrariness of advancement: as you diligently tap your way up from the intern’s desk to the president’s, the game punishes you. Sometime for working too hard, sometimes for working too little, and sometimes for no reason at all. You get unexpectedly canned at random, only to start the process over as an intern at a new company. (A ticker at the top of the screen reminds of how many companies you’ve been fired from.) Only a handful of players, reportedly, has ever been made it to president.[2]  A goal of the game, is, cynically, not to build skills, but to collect all the reasons not to get fired. Netizens have compiled a list of all 29 ways, which includes letting out a company secret, making a typo on a contract, or, opening a box of donuts that contains a secret bribe.[3]

Figure 1:  The Korean version advising you to resign, a choice the game makes for you. Image from the Google Play store.

Take, for instance, the original title describing a “regular job.” This marks a semantic distinction in Korean between regular and irregular, not to be conflated with full- or part-time jobs. Both regular and irregular workers may be full-time, salaried, and receive some basic benefits. But only regular workers have the opportunity to get promoted, receive a pension, and are valorized socially as symbols of personal and professional achievement. Similarly, the phrase “(don’t) get fired” in English isn’t even in the original Korean. Rather, when you do lose your job (about every few minutes or so), an alert pops up saying “Advised to Resign,” a choice the game makes for you. Firing workers is difficult under Korean labor law (not “at-will” like the US), so workers who do not fit in or perform poorly can be encouraged to quit for a variety of reasons. In both the Korean and international versions, one could be forced to resign for ordering the wrong item at lunch with the boss, one of the 29 ways to get yourself ousted.

Like a lunch snafu, the gameplay is full of recognizable tropes and figures of a distinctly Korean office life: labels of manager titles, the tending to the beck-and-call of senior workers, the sacrificing of life-milestones like marriage for work, and the imagery of “burning” passion (following a Korean idiom of working hard). Interestingly, the game’s graphics remain unchanged between versions, and international users may not recognize the Chinese character 甲 on the president’s desk. It denotes the first position in an old Chinese counting system which has become associated in Korea with the “top” and, by extension, a “person on top” (akin to uses of the “alpha” in the US). These recognizable tokens extend to game scenarios: a manager asks you to go hiking on the weekend with co-workers, forcing your choice. For Korean players, the corporate ladder is not just a matter of a cruel economy; it is a site of stark ethical conflicts that make you choose between personal freedom and collective sacrifice.

For Korean players, these have resonance with real life scenes, albeit tropically exaggerated. Participating in hiking with the boss or showing carefulness around what you order at lunch are events that evaluate your decision-making, and by extension, your fitness to work within the office collective. A minefield of these local in-group signs makes the game all too similar to a competitive and seemingly arbitrary Korean labor market. That the game mimics real life is sadly more than clever design: the developer created the game after he too was suddenly let go after four years at his own “regular” job.

[4] The English version declares that it has over one hundred million downloads on Google Play. Users can also play the game in 12 different languages. The game is free, but has in-app purchases that allow users to build points to get ahead