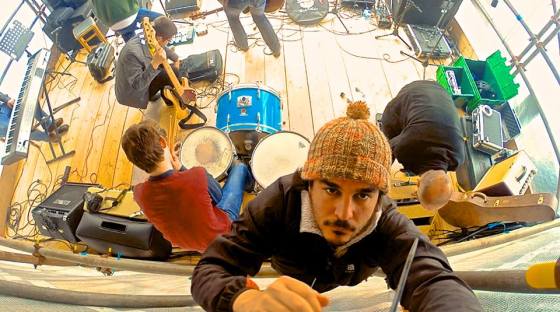 I lived for two years in Shetland, a Scottish archipelago of 23 thousand inhabitants, at latitude 60 North. One in every ten residents is a proficient fiddler. There, spreeing, making and listening to music with friends all night, unconcerned about time, is the core practice of an epistemological tradition developed over the last centuries. The website www.shetlandspree.com is an archive that organizes the audiovisual materials I have produced so far, drawing on hundreds of hours of performance and interview footage. Spreeing suspends divisive preconceptions of race, gender, class, culture, nationality and musical proficiency. It engenders an optimal state of flow, fostering social intimacy between newcomers and insiders through inclusive music making and storytelling.

My 99th page comes from the history and literature review conclusion. For me, it represents a refraction of the whole, touching upon some core issues. While considering relationships between identity and mobility, I argue that, among Shetland’s sociomusical inhabitants, ‘where you have been also contributes to the sense of who you are to others’. During fieldwork, I noted how life trajectories and mobilities shaped personal and social identity perceptions. As Kearney argued in his 1995 Annual Review of Anthropology article, identities develop through the ‘both-and-and[n]’ logic of growth and transformation, connection and divergence (p.558). The mutual appreciation of character, common among Shetland spreers, is only cultivated by fostering overlapping, long-term relationships – that is, lifelong friendships characterized by social support, intergenerational engagement, face-to-face dialogue, listening, and interpersonal knowledge.

This spreeing tradition, notes my 99th refraction, is not ‘affixed to a set of aesthetic definitions’. Instead, it reflects ‘people’s engagement with their social relationships and the world’. Individuals who tried to define Shetland’s music tradition, pigeonholing it according to genre, playing style, repertoire, and instrumentation, failed. A shared resourcefulness principle supports the free engagement with ‘outside’ musics as creative materials. Thus, eclecticism is more common than genre chauvinism. Moreover, since 1981, the annual Shetland Folk Festival brings musics from different cultures to the isles, hosting every visiting musician with local families. According to spreeing principles, which I called Spreenciples, all participants express something personal, unique, and valid. Spreenciples­-attuned musicians continuously transpose stylistic and cultural boundaries, growing in self-defined directions.

Rodrigo Ferrari-Nunes, Ph.D is a social and cultural anthropologist, classicist, and musician from São Paulo, Brazil. He attended the University of Utah, in Salt Lake City (2000-2003), the University of British Columbia, in Vancouver, Canada (2003-2010), and the University of Aberdeen in Scotland (2011-2017). Rodrigo’s academic background includes studies in an array of subjects such as Ancient philosophy, science and religion, Latin language, ecological anthropology, indigenous ways of knowing, critiques of mainstream evolutionary biology and physics, colonialism and development, music and community life, resonance and gratitude, polymathy, chess and music, etc. You can reach him at cosmoartist@gmail.com.