I have been a fan of Soid Pastrana and his work for many years. I bought my first Pastrana lithograph in 2005—a print in which an elephant appears.  This is a story about elephants, social media, and an artist who credits a winged green elephant with setting him again on a productive path. 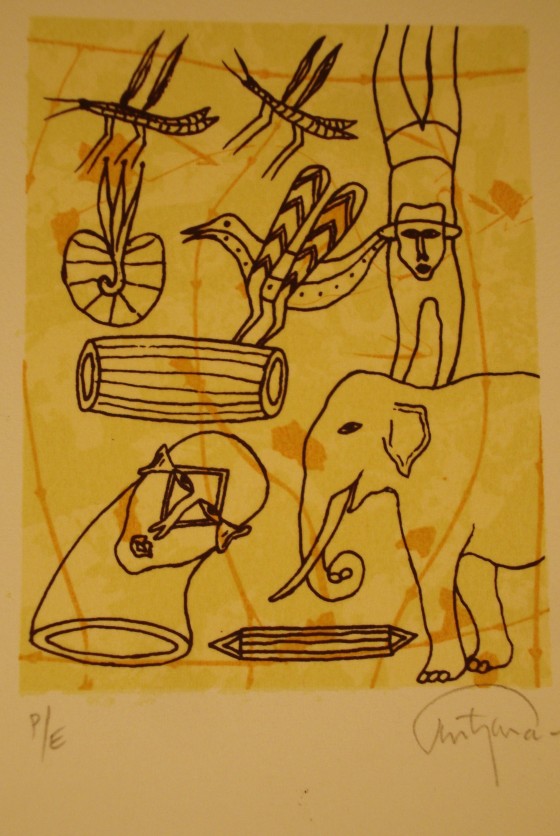 Soid Pastrana, who has achieved an international reputation as a painter and printmaker, was born in 1970 in the 7th section of the Isthmus Zapotec city of Juchitán. The 7th is a section of farmers, fisherman, and artisans.  Unlike the central sections of the city, this one has few streets laid out on a grid plan; callejones, or alleyways, come in at crazy angles; houses are likely to be extended family compounds with big patios to accommodate both work and play.  Pigs and dogs roam the alleys and streets, sniffing out food and a cool place to sleep. The “city” part of the 7th blends with the countryside. The language you hear most commonly, then and now, in the homes and on the streets, is Zapotec.  Children grow up playing games in the streets and compounds, and the wild countryside is a familiar playground

Soid spoke only Zapotec until he went to school where he showed a talent for drawing.  He went to the School of Design of the Institute of Fine Arts in Mexico, D.F. and has had more than eighty exhibitions throughout Mexico and in the United States, Cuba and Indonesia.  After Indonesia, elephants joined his zoological garden of peculiarly Isthmus creatures—fish, roosters, dogs, armadillo, water birds, most of which, including the elephants, appear fully winged and floating among palm trees, men flying on fish or sometimes elephants, the occasional Corona beer logo or a 1950’s style low-rider southern California car, lotus and frangipani blossoms, Juchitecas wearing traje [matching blouse and gathered skirt] and the big, white lace headdress, and the occasional semi-nude woman with tattoos. His work–lithographs, paintings, posters, party invitations, and book jackets — stuns the eye with its vibrant colors, the colors that define Juchitán. Its fantastiscal scenes impeccably executed are also characteristic of Juchitán art since the great Rufino Tamayo and Francisco Toledo.

Soid speaks about himself as an indigenous person in the much larger Mexican demographic; being raised in a Juchitán that is magical, marvelous, full of artists, and a rebellious and resistant place, gives him a particular viewpoint. It is a home to which he always returns. But he is restless, inquieto, describing himself as a “citizen of the world, without limits and without borders,” needing to be in other places, seeing other lives and landscapes, experimenting with  all kinds of media, and collaborating with other artists, writers, and poets. Art, he says, surpasses borders; art serves as oxygen.

His restless search for ways in which to let his creativity grow led him in 2014 to open a workshop and store which function as a creative space.  His designs appear there on t-shirts, sneakers, coffee mugs, and iPhone holders.  But he is also working with Juchiteca women, experts in the traditional forms of embroidery.  He produces a design and there follows a conversation with the women about colors and lay-out.  Pastrana says “the only thing I do is draw. In the end, the craftswomen add the magic. I am an apprentice and observer of what appears on the cloth. We are learning together. There are colors that react differently against different backgrounds.  They suggest these to me” (Pastrana in Redacción, December 2, 2014).

For Pastrana, this is a way to bring together art, culture, and the work of artisans.  The results are unique pieces that demonstrate both a traditional and a contemporary aesthetic so that people can be traditional and contemporary at the same time, and it contributes to the maintenance of the technique of traditional embroidery.  Young women, he hopes, will be interested in continuing this tradition.

How is his work seen in this resistant and rebellious community of Juchitán? Most specifically, his fascination with elephants? Elephants on trajes? Juchitecos have a strong aesthetic sensibility and appreciate the craft and discipline required to create and sustain it. They also cherish a sense of what marks them off from the rest of Mexico and the world. The substance of that “sense” changes as Juchitecos position themselves as participants in a global community. That positioning includes becoming master users of the latest technologies and manipulators of social media– iPhones, smart phones, tablets, equipped with all the apps, connect them to the world via Facebook, twitter, facetime, Skype, messaging.  Soid and others whose work and passion makes them frequent travelers can be and are virtual participants in multiple “homes” around the globe.

In the case of elephants, attitudes pro and con became part of a virtual Facebook conversation that followed on Soid’s venture into creating trajes with his designs, including his signature flying elephant.  Many Juchitecos rushed to buy his t-shirts, coffee mugs, and iPhone holders while some remained skeptical of traje with elephants and flying fish.  Traje has always had flowers, some said.  Soid responded on FB with photos of young attractive Juchitecas sporting trajes with his designs; two adorable children carrying a pole between them with two traje blouses, one with an elephant, the other with a rooster; images of a blouse in progress–again with an elephant. He slipped into the conversation an old black and white photo of an Isthmus traje with a distinctly non-floral, geometric panel design. The back and forth continued and Soid posted a photo of himself lounging in a patio chair with a photo-shopped large, handsome elephant head. Then came a post with a photo of a masterfully embroidered traje with flowers—a product of his shop, and a caption that read, “For those who do not like elephants.”

The bottom-line for the trajes with elephant, fish, rooster, and masked men is that the women who make them are masters of their craft so, in the end, the Juchiteco aesthetic that recognizes craft seems to have tipped the balance.  But there is also no doubt in my mind that the back and forth conversation via Facebook was enjoyed, followed, and admired for its wit by everyone regardless of their opinions.

Soid is a major force in the community, which claims him proudly. He is, after all, one of them, a Zapotec from the 7th. That he recognizes the commitment that this entails means that they will always have his back, elephants notwithstanding. He continues to push the boundaries, with a seemingly inexhaustible supply of energy and ideas. He has always mentored young artists– a graffiti collective, Colectivo Chiquitraca, and the city’s newest musical group—Juchirap, three young Juchitecos rapping in Zapotec. He and they and Juchitán share the fruits of all this creativity with a global audience courtesy of the newest iterations of social media.  Poet Enedino Jiménez probably had not imagined this when he warned the world in his short poem, “The Iguana runs around the World,” which ends with this line: “Be warned, world, Juchitán lives” (my translation from the Zapotec).  But he would have loved it.

Anya Peterson Royce, Chancellor’s Professor of Anthropology and Comparative Literature, has worked with the Zapotec of Juchitán, Oaxaca since 1971, on topics that range from identity to the arts, to death, to landscape. She also writes and teaches about the performing arts and prefers classrooms in theatres and museums that allow for workshops and performances.