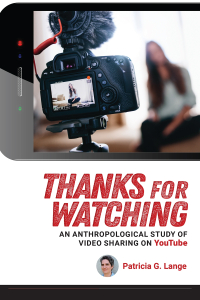 Jan English-Lueck:  You have been writing about YouTubers, on and off screen, for over a decade.  How is this book continuing themes you have been developing for a long time and what is a departure from your previous work?

Patricia G. Lange: My work has oriented around empathetically exploring nuances of mediated interaction to understand the allure of interacting in digital spaces. Throughout my career, criticism of mediated interaction has persistently been very harsh—from scholars and the public. Yet, mediation is part of the human experience. My current book similarly tries to understand why vlogging (video blogging) and sharing the self through media was so important to YouTubers interested in sociality. My past and current research challenges the notion that mediated interaction is simply parasitic to and less meaningful than in person interaction. The sociality YouTubers experienced was emotional and real—both online and off. Even going back to my dissertation, I have been concerned with problematic talk and issues of online access. Back then troublesome participants were called “flamers” and today YouTubers complain about “haters”—groups that exhibit differences but also similarly produce chilling effects to participation. I have explored how digital spaces facilitate or challenge democratized participation. This book continues this passion by analyzing experiences of YouTubers who originally saw the site as a place of tremendous possibility for offering a potentially democratized space for self-expression and interaction. Thanks for Watching traces the initial excitement and eventual ensuing complications that an interconnected group of people experienced. It explores difficulties such as haters, competition brought on by monetization, and changes in content. It also analyzes technical complications such as algorithmic rankings that privilege certain types of content over quiet, social videos. The book concludes by providing advice and recommendations when conducting ethnography in digital spaces. It also provides information about what might be changed to renew a corner of YouTube for sociality, or perhaps to more ambitiously create new video sharing sites that fundamentally support interaction.

In the past, my work has centrally revolved around issues of analyzing technical identities, and how “geeks” socialize to learn and project an aura of being an expert. Thanks for Watching departs from this research program. Identity work has been important for many online studies, but other interesting rubrics exist. Inspired by Lefebvre, my book uses the lens of “rhythm analysis” to explore how temporalities, rhythms, and interactions over time shape video-mediated sociality. For example, an arrhythmia is an irregular rhythm, one which often indicates a problem. YouTubers at times experienced arrhythmias between honoring their creative pace of production and satisfying the relentless demands of audiences and algorithms. At times creators could not keep up with such requests and took a break. Disruptions in posting video content might be observed by viewers who became concerned when video making output became irregular. It could feel as if a collective was in tune with a video maker and was watching out for them. Focusing attention on such patterns leads to significant analytical insight, especially in terms of seeing such deep and widespread connections as illustrative of our increasingly “posthuman” condition. I remain circumspect about usage of this term, which has the unfortunate connotation of asserting we are no longer human. Yet, we are far from being robots or files containing a downloaded consciousness. Nevertheless, I chose to explore this rubric given that some of its characteristics can quite clearly be observed on YouTube. Collectives of interconnected people, artifacts, commercial interests, and technical operations are deeply influencing how people express the “self” in both communal and troublesome ways.

Jan English-Lueck:  You observed an actual drum circle at a YouTube meet-up in Toronto.  You then observed it is an appropriate metaphor for video sharing.  Could you tell us more about how that metaphor illuminates participatory cultures?