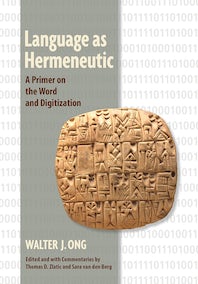 Maddy Adams: You are both professors of English, and this blog is an anthropology blog. Walter Ong’s work has traveled through so many disciplines and departments: communication, rhetoric, linguistic anthropology, English, religion, history, and media studies. Clearly, Ong’s ideas have had far-reaching influence and appeal. Why do you think his work is relevant for so many different disciplines?

Sara Van Den Berg and Thomas D. Zlatic: Ong once identified his primary academic interest to be the evolution of consciousness out of unconsciousness within the context of 13.5 billion years of cosmic evolution, particularly as related to communications technology. Such a study obviously touches upon many disciplines, and while Ong resisted classification, he did reluctantly agree that his interdisciplinary work might be understood as cultural anthropology.

It is more than coincidence that two of the most seminal founders of “media ecology”—Ong and Marshal McLuhan—both earned Ph. D.s in Renaissance literature.  This gave them a broad sweep not only of eras and events in the material world but also of the “internal history” of Western culture. Ong proposed there were four stages of human communication: primary orality (in which writing is unknown), writing, print, and electronics; what we know, how we know, and how we structure society are influenced by the dominant communications media in a culture. Each communication stage promoted different psychodynamics and different orientations to space and time.  For instance, in his article in American Anthropologist he explained that post-Gutenberg cultures tended to spatialize noetic processes due to visually-based analogues for knowing (“world-as-view”), whereas oral cultures’ valorization of sound promoted a mentality in which words and ideas are happenings (“world-as-event”). Such a thesis invites further investigations in several disciplines.

Maddy Adams: You describe Ong’s notion of “secondary orality” as “the transmission of speech in electronic media; this…secondary version of orality depends on the underlying resources of literacy” (3). Could you talk a little more about this foundational concept? What might a student of linguistic anthropology have to gain from becoming familiar with this term? END_OF_DOCUMENT_TOKEN_TO_BE_REPLACED