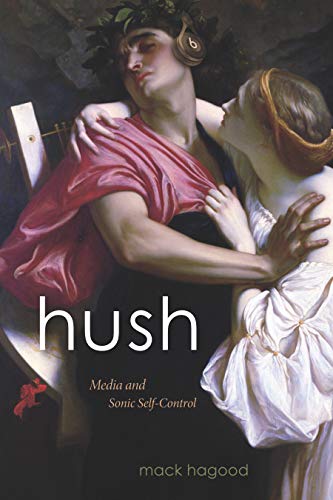 Jacob Smith: Hush offers a strikingly original take on the history of devices and practices that offer control over the sonic environment. As a framework for your analysis, you coin the terms “orphic media” and “empty media”: what are these?

Mack Hagood: In its narrowest sense, the concept of orphic media refers to the ways people use audio media to create a safe space for themselves. In Greek mythology, Orpheus saves the lives of the Argonauts by neutralizing the Sirens’ song with a song of his own, pacifying the treacherous environment of the Siren Strait. Over the past sixty years or so, a number of media devices that operate on this principle have arisen: bedside machines that generate white noise or nature sounds, commercial recordings and smartphone apps that do the same, wearable devices that counteract tinnitus, noise-canceling headphones, and others. All of these technologies fight sound with sound to control one’s environment, thereby allowing the user to control her own subjective state. If we think of these disparate technologies as the products of a single industry, it generates billions of dollars by promising control over how we feel, sleep, and concentrate. But up until now, we haven’t thought of orphic mediation as a media practice—and, in fact, we haven’t thought of most of these technologies as media at all, because they don’t have “content” in a traditional sense. They are “empty media” that challenge our scholarly and lay notions of media as technologies that inform, entertain, or transmit messages. In fact, these media aren’t meant to be paid attention to at all, which is what allows them to be so effective!

Now, this might seem to be simply a quirky and overlooked product category or a lacuna in the field of media studies, but I argue that it’s much more than that. In the book, I use these technologies as a way to explore the way listening has become difficult, painful, and even paranoid in the era of the attention economy, which equates the liberal subject with controlled attention while also flooding consciousness with voices, information, enticements, and distractions, undermining any possibility of self-control. This personal, sensory conflict fuels our politics of filter bubbles, right-wing echo chambers, campus safe spaces, and other contemporary controversies around listening. Studying listening is useful because a similar reactivity and even physiology are at work when we recoil from a sound we find uncomfortable and when we recoil from a social situation or even an idea that we find uncomfortable. So, in its widest sense, the concept of orphic media is about more than sound technologies. It claims that the most fundamental purpose of all media use is not to transmit information, but rather to navigate our affective relationship to our environment. And it’s the misguided ways we try to stay in control of that relationship that drive our current conflicts.

Jacob Smith: Your first chapter concerns the use of orphic media by the sufferers of tinnitus. What is distinctive about these practices in the broader terrain of orphic media? What methodological challenges did you face when writing this chapter?

Mack Hagood: In the course of studying orphic media, I quickly realized that people with buzzing, ringing, or other putative phantom sounds in the head or ears were among the most committed users of these technologies. During my ethnographic study of tinnitus and the roles that media play in its diagnosis and treatment, I came to understand just how high the stakes of orphic media use can be. Many of us experience tinnitus to some degree or from time to time and are relatively unbothered by it, but for a small minority of people, tinnitus is a deeply disturbing experience that interferes with personal relationships and the ability to work or enjoy life. And as an invisible disability, inaudible to others, tinnitus can often be met with skepticism and impatience. Loneliness, anxiety, and depression are strongly associated with suffering from tinnitus in this way.

By visiting audiology clinics, research centers, and tinnitus support groups, as well as volunteering with the American Tinnitus Association for a number of years, I met many people with tinnitus and learned a great deal about the nature of aural suffering. And, indeed, almost everyone I met used white noise or other orphic technologies either as digital folk remedies or as prescription media, under the guidance of an audiologist or other clinician. They used media as what Foucault called “technologies of the self” that help us bear the burdens of liberty, the requirement to be free of hindrances and limitations that a liberal society places upon us.

When you ask about methodological challenges, I think perhaps you are referring to my own struggle with tinnitus during my fieldwork, which I discuss in the book. Hush is based on my dissertation and shortly after my research proposal was approved by my Ph.D. committee, I accidentally overfilled a bicycle tire at a gas station and it burst right next to my left ear, leaving me with very loud tinnitus. I was quite upset by this and now I had to begin my fieldwork on the subject of tinnitus, interviewing people about it and thinking about it every day. It was really challenging and I found myself dealing with similar anxieties and depressive feelings as my interlocutors, which not only heightened my empathy for them, but also added a visceral, lived dimension to my analysis. It made me understand the intimate relationship between fear and control, the way that refusing to accept what wasn’t freely chosen only amplifies suffering and, conversely, the way that opening oneself up to sounds we didn’t choose can actually diminish our suffering. Truly, the only way I was able to stop suffering from tinnitus was to gradually accept that it was part of my body and my experience, whether I wanted it or not. In the end, my experience and study of tinnitus was the key to understanding the impetus for all orphic media and to formulating the critique that evaluating life only in terms of the freedom to choose actually instills more fear and suffering into life. END_OF_DOCUMENT_TOKEN_TO_BE_REPLACED