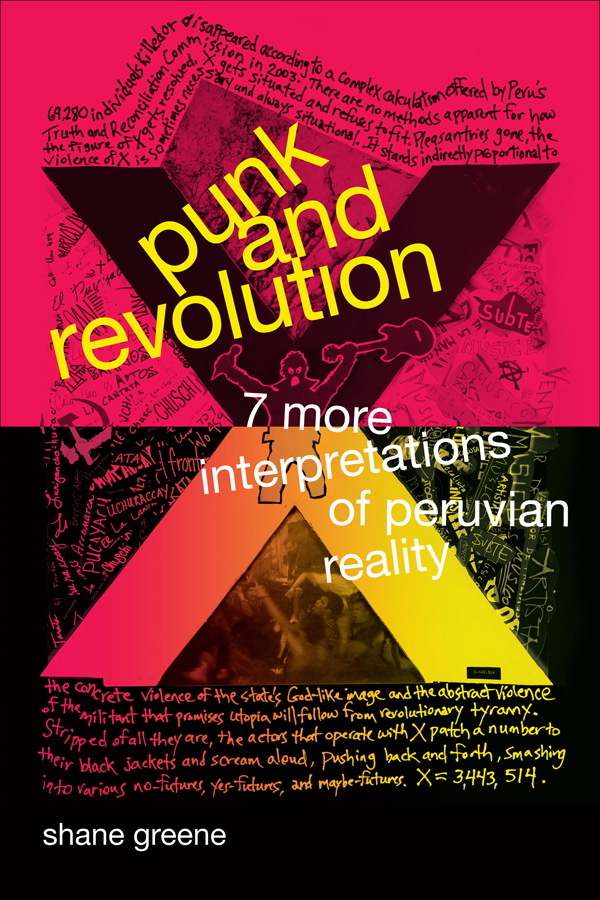 Can you tell us about Punk and Revolution: 7 More Interpretations of Peruvian Reality and what you set out to accomplish with the book?

I hope the book goes down as a few things:  a novel take not just on Peru’s war with the Shining Path but, somewhat by extrapolation, the narratives that dominate understandings about “Cold War Latin America.” I’m invested in inserting some wacky anarchists into that otherwise standard tale of the “hard left” (that is, Marxist) and “hard right” alternatives that dominated the region from the 60s to the 90. I also want some sort of disruption into punk’s too comfortable location in the Anglo North Atlantic rock nexus, and all the debates about provocation, selling out, and being reborn that that typical story about punk has generated. And I guess it is something like a modest assault on academia to make it slightly less boring.  There’s also the distinct possibility I was just trying to live “rock subterráneo” vicariously and reopen old wounds about the politics of feeling out of place, something that started when I was about 13.

Punk is genre-busting music.  And this is a genre-busting ethnography.  Can you tell us about your ethnographic style here, including all that good nasty language?  Do you see your book as having lessons for other anthropologists in thinking about experimenting with our writing?

Not everyone thinks my nasty language is all that good, and some were in a position to question or kill it when they thought it too nasty, or, maybe just too “masculine” (oh, how they have overrated my masculinity). It was never really a project about challenging “political correctness” (a phrase that emerged on the radical left but has long been appropriated by the far right) and more about wondering what we can or can’t say with academic voices or how we are or are not allowed to juxtapose academic voices with other, um, less staid, voices.  The criticisms sometimes made me really rethink the nastiness (Interpretation #4) and, other times, I just snuck it back in elsewhere (because I’m sneaky). That said, even my kid knows I have a dirty mouth so probably a certain percentage of it is just how I talk anyway. But, really, the main thing was just that I wanted each of the 7 Interpretations to sound/read/look totally different. Eventually, that meant not even writing essays, which explains the Situationist-style art project (Interpretation #6) and the short story (Interpretation #7).  For that matter, there’s technically more than 7 Interpretations given all the supplemental side projects that the book is linked to on the companion website (www.punkandrevolution.com), the zine-stuff, a music video my band did, a tee shirt I made, and so on. The idiosyncratic aspect of “just interpreting shit” (like the punk Geertz or something) makes me not really know if there’s a teachable lesson.  But in general I’m all for encouraging people to go beyond or even explicitly against the standard and dry academese we love to subject ourselves to.

Anthropologists have long had Peru as a favorite stomping ground.   But much of that scholarship has been about the rural Andes.  Your focus is on the megalopolis of Lima.  How do you see your contribution to understanding urban experience in Peru and Latin America?   And to how we understand Peru and Latin America more broadly?

There’s definitely a thing with Peru and the Andes fetish. It goes deep and straight to the heart of nationalism.  It’s hard to even think of a handful of interesting books about Lima – on any topic – much less about other Peruvian cities (Arequipa? Piura? Trujillo?) written by anthropologist (oh, but Daniella Gandolfo’s book about Lima is amaaaaaazing).  I think this was honestly more of a side effect than my real intent, that is, I ended up creating a peculiar look into one segment of Lima, basically the middle-class and up (since rock as a genre is mostly middle-class and up).  There’s some good work on hip-hop out there in countries like Cuba, Brazil, and so on.  And there’s some STS types doing interesting stuff that at least crosses into urban spaces but isn’t necessarily about “the city” or necessarily “anthropology” (thinking of Anita Chan’s book Networking Peripheries). Either way, we are overdue for some anthropologists thinking more about the multiplicity and depth of urban subcultures throughout Latin America, as well as their global inspiration in, and creative divergence from, subcultures that emerged elsewhere.  Even when anthropologists finally come out of the countryside and go to the city they seem to end up focusing on the same subaltern populations or themes, like rural-to-urban migration or historically racialized groups, and so on.  But welcome to the history of anthropology, I guess.

What do you see as your contribution to understanding the global history of punk?  And to how we think about sound and the politics of sound?

The book doesn’t talk about sound per se but I got very interested in the geopolitics of music formats, hence all the stuff about production and circulation (and piracy) of demo cassettes in Interpretation #1.  Of course, format studies are now an offshoot of sound studies. There’s something mystically beautiful and marvelously awful about the sound of Peruvian punk from the 80s.  The conditions for production (or instruments available for recording for that matter) were so bad, it is just truly wonderful.  Some contemporary Peruvian punks and hardcore types wax nostalgic about the cassette format for that reason and so they buck the global digitalization trend by recording new albums on cassette now when it seems utterly anachronistic.  The global north has its own history with cassettes but it isn’t quite the same thing.  First off, it more often connotes some sort of social intimacy or friend networks (such as: the friend who recorded album X for me; or the girlfriend who gave me the mix tape Y).  In Lima, because of the dramatically unstable political context there was a curiously ambiguous dialogue taking place between the “underground rock” economy (cassettes, fliers, art pieces, and so on) and the other “underground political” sector of Shining Path organizers and militants who were also producing art, propaganda, newspapers and other genres for the “revolution.”  Both were happening outside, and against, mainstream media circuits (and, for that matter, the state).  So, it became really dangerous for Peruvian punks at the time and many of them found that out the hard way (hence Interpretation #6).  There was a deep political risk (of death, disappearance, imprisonment, exile) built into being a Peruvian punk and producing things that were punk-like in the Peru of the time.  That, as far as I can tell, is quite unique within punk experiences writ large.

What’s your next project?

I’ve been throwing around this term “misanthropology” for the last few years and threatening to write a book about how we, the human species, are all gonna die.  And probably should. Given November 2016, seems like maybe it’s a good time to get started on that.