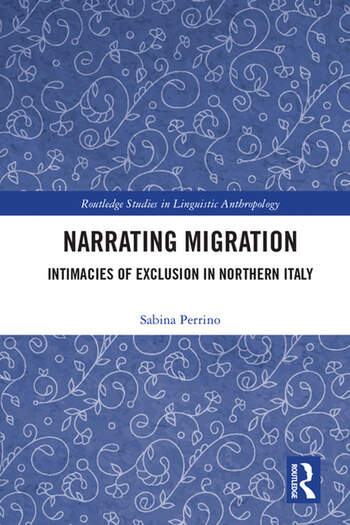 Daniela Narvaez: In your book, you reflect on your own experiences as a way of discovering intimacies of exclusion. You start by sharing with your audience that you conducted many interviews in several hospitals as part of a project regarding Senegalese ethnomedicine in West Africa. From this experience you had the opportunity to interview participants who, like yourself, spoke standardized Italian and Venetan. Can you please share more with us about your decision to turn your attention to Italians and their narratives? What led you to start thinking about narrations and their relationship to racialized ideologies?

Sabina Perrino: First of all, I would like to thank you for these lovely questions. In the early 2000s, I was studying the fate of Senegalese ethnomedical practices both in Senegal and in Northern Italy. I was interested in examining how Senegalese ethnomedical practices were adapting to or changing in transnational contexts such as Italy. Ultimately, my goal was to compare them with the ones that Senegalese migrants had available back in Senegal, before migrating to Italy. However, when I started to collect data in northern Italian hospitals and elsewhere, I immediately realized that there was another important ideological layer that needed to be studied: how northern Italian doctors, nurses and ordinary people were reacting to the arrival not only of Senegalese migrants to Italy, but of migrants and refugees’ arrival more generally. Besides sharing stories of migrants’ behavior in hospitals and of the use of their medicine together with Western biomedical cures, northern Italian participants started to share stories about their own anxieties around the changes that the Italian society had undergone since the 1970s when new migratory flows started to enter Italy. Many of my collaborators shared stories about their resistance to these new waves of migrants, often made racialized remarks, and, overall, enacted strong ethnonationalist stances. After my dissertation was completed, I then realized that it was the appropriate time to turn my attention to Italians and to listen to their stories to study these ideological shifts in Italian society. It was the early 2000s when I started to collect these stories, a moment in which, coincidentally, right-wing political parties, such as the Lega Nord (Northern League), were just at the beginning of their path of success across the country.

Daniela Narvaez: In your book, you have shown that through various initiatives, such as using Venetan in public signage, the creation of grammars, dictionaries, folktale- and proverb-themed books, among other efforts, Venetan has been recently linguistically revitalized. However, you also illustrate that this revitalization is not an isolated effort but has been transformed into a political emblem of regional group membership. You explain that “language revitalization initiatives in Veneto have gone hand in hand with the enactment of exclusionary stances concerning migrant groups and other people who are believed not to be fluent in the local language”. What are the challenges and consequences of regional language revitalization in these situations where language is being promoted among their speakers on the one hand, but on the other is being used as a political tool that creates intimacies of exclusion? How do you see your book speaking to the current political moment worldwide in which, as you point out, exclusionary stances and negative stereotypes about migrants circulate at a fast pace? END_OF_DOCUMENT_TOKEN_TO_BE_REPLACED