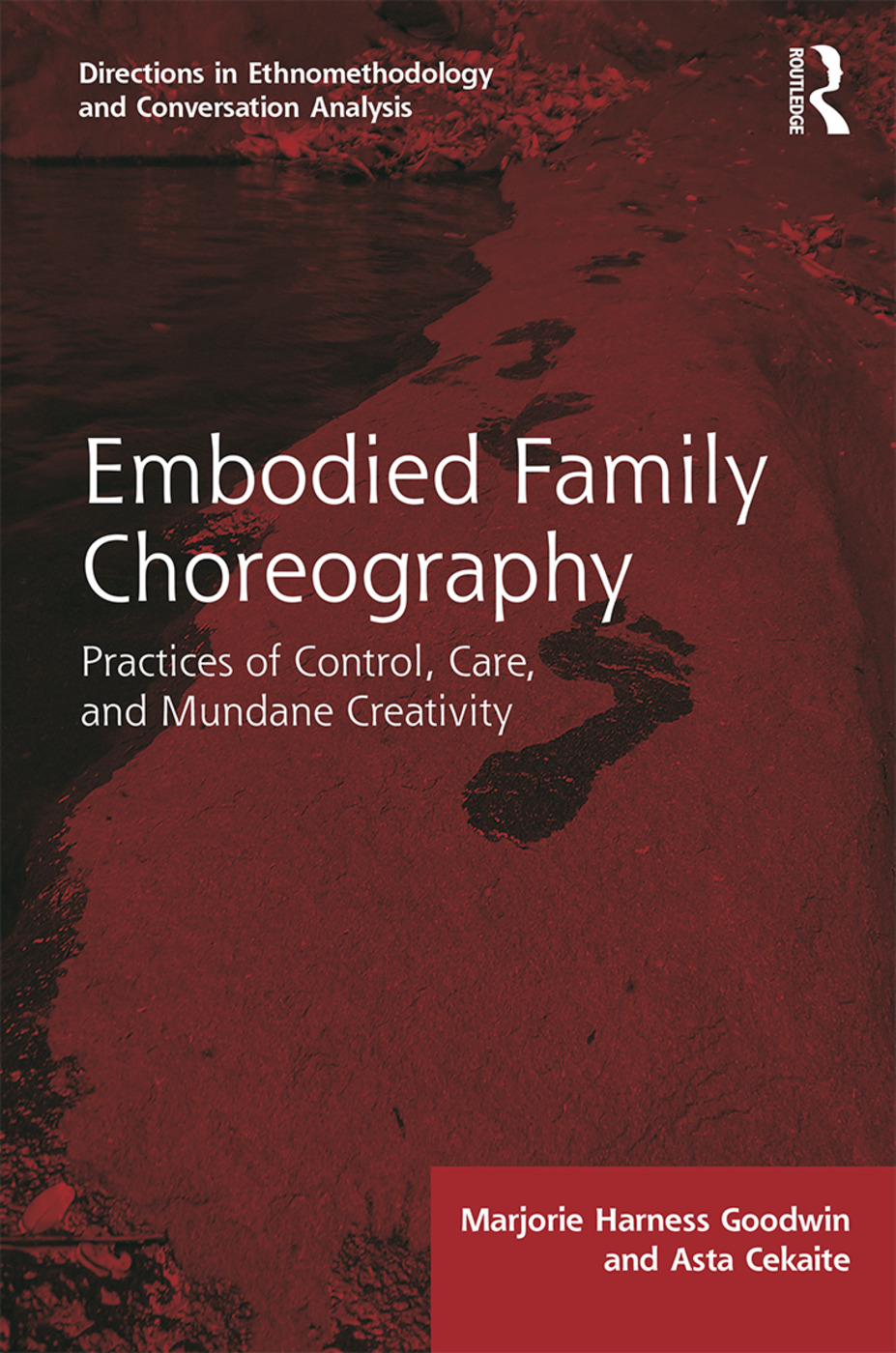 YJB: In arguing that the family as a social institution is achieved through intercorporeal co-ordination among family members in their lived and embodied everyday practice, you draw on data from middle-class US families and middle-class Swedish families. I was wondering about your motivation underlying the selection of these two populations. While you touch upon cultural difference when discussing general metadiscourses, you don’t seem to distinguish interactional data of each country throughout the analysis. If you are more concerned with the universal aspect of haptic sociality in family life, why did you choose the US and Sweden and what occurred as unexpected or interesting discoveries for you in examining these two countries?

MHG and AC: We will briefly outline the history of the project of Center for Everyday Lives of Families. Kathleen E. Christensen, Program director of the Workplace, Work Force and Working Families program funded by the Alfred P. Sloan Foundation, contacted Elinor Ochs to see if she would be interested in establishing a research group to study how middle class American families balance work and family. Elinor established an interdisciplinary group at UCLA and recommended that research collaborators be contacted at two other sites (Sweden and Italy), where there was also an established interest in documenting everyday family life through video recording. Karin Aronsson in Sweden and Clotilde Pontecorvo in Italy became partners in the endeavor. For the US sample some parents were first-generation Latin American, European, or Asian immigrants. Two of the thirty-two US families were headed by gay parents. Both parents in the US sample worked in professions ranging from dentistry, law, and medicine to education, social work, administration, and film dubbing.

We were interested in discovering characteristic features of family life as fully embodied, that is, as corporeal, and our focus and approach was inductive. As part of the inductive, discovery-based approach we outlined the recurrent practices of embodied family choreography in both cultural contexts – practices that in some ways are similar and in some ways vary. Portrayal of discovered similarities can provide an inspiring way of finding the common features of human sociality — the interest put forward by anthropologists such as Charles Goodwin (see for instance his book Co-operative Action, 2018) and Webb Keane on ethics and morality in Ethical Life, 2016. For instance, the interactional organization of hugs, as well as haptic shepherding, is found not only across our two data sets, but has been since documented in various studies on the use of touch in other cultural and institutional contexts as well. Concerning the differences, as mentioned above, we did not engage in an a priori comparative approach, but culturally specific features are pointed in our conclusion. There we discuss such issues as how children in Swedish middle class families are fostered into moral accountability through activity contracts, and how the directive sequences in Swedish data are formulated in a rather robust manner – starting with initial interrogatives and only later, upon noncompliance, are transformed into haptic shepherding. Such organization can be interpreted in terms of the child-orientedness of Swedish society, where children’s agency (and the possibility of making their own choices) is foregrounded. However, we can also see that compliance needs some persuasion, and embodied practices. While haptic shepherding is found in American directive sequences as well, the directive trajectories are not organized in the same way.

YJB: The attention of the book to simultaneous mutual monitoring as well as to sequential trajectories is compelling in studying emergent meaning-making among family members. At the same time, you argue that embodied adult-children and sibling interaction constitute family habitus (pp. 4, 250) and family ethos (pp. 19, 256) through inculcating socially accountable ways of bodily techniques (pp. 13, 258). I appreciate your point that emergent phenomenological experience is situated in and contributes to the broader social order. Would you elaborate more on your ideas about the investigation of everyday interactional processes of ethos and habitus?

MHG and AC: Shaping children as particular kinds of social inhabitants and actors in the family, that is as members who are responsible and accountable, involves “getting things done.” Directives provide the central locus for constituting local social order in the midst of managing or orchestrating routine tasks in the family (hygiene, cleaning, getting dressed, homework). Different choices among various directive and other communicative practices create different types of social actors, social organization and alignments. Negotiations in response to parental directives can take different forms and display a range of alternative sequencing patterns, resulting from factors such as the type of directive given, accounts or reasons given for the directive, and next moves to the directive, as well as the facing formations of participants and stances or affective alignments that participants maintain vis-à-vis one another. As often the activities parents propose are ones that children like to postpone, examination of directive/response trajectories allows us to see how children agentively and creatively orient themselves to a project, stalling and otherwise attempting to derail it, and parents’ responses to such maneuvers. Different types of moral actors are co-constructed through displays of reluctance and resistance, in contrast to willingness to carry out routine courses of action.

YJB: The book draws on video data in order to explore visual, aural, and haptic aspects of family interaction, and I liked the inclusion of drawings of the scenes and spectrograms of pitch and voice quality. For instance, it was fascinating to see the co-occurrence between hug and creaky voice (p. 150), and format tying not only in terms of morphosyntactic forms (p. 202) but also in terms of pitch (p. 88). While the family interaction as well as fieldwork experience is multisensory, the manifestation of data in a written form primarily relies on the visual channel. I was wondering what was particularly challenging during your research given the limitation on the data exposition.

MHG and AC: The process of analysis requires to attend to both the verbal modality, where various sensorial aspects (participants’ sensations) can be verbalized and articulated (‘your breath stinks’) and the visual. However, the interpretation of the emergent and detailed character of sensorial corporeal aspects of family choreography are also made possible by numerous and repeated viewings of video recordings. Interpretation of course also involves our own previous corporeal experiences. Visual representations helped us to provide a richer portrayal of embodied and spatial features of family encounters, and using many pictures which are integrated in the transcript (in the places where they occur in an interactional situation) is clearly an important way of presenting the reader with at least visual representations of haptic encounters. Taste smell are, however, not accessible.

YJB: While the book argues that family identity is not given but created through “doing family” (p. 257), the families examined are basically composed of adult parents and young children. It seems as if a certain ideological family image is already shared among western countries, and I was wondering why you chose this family type and this phase of family life in looking into the tension between control and care as well as that between ordinary routine and creative exploration. In other words, what kind of social conditions and cultural ideologies of family are represented in your study and why it was beneficial to focus on these families?

MHG and AC: Our multi-disciplinary project focused on how dual earner middle class families manage the complexities of daily life, balancing parenting and work in the US and in sister projects in Europe. The psychologists in the project wanted to investigate a specific age group with at least two children. They wanted at one child to be at least eight years old. The US study included families of a range of ethnicities and two families were headed by gay dad couples. In Sweden, the absolute majority of families are full-time dual-earner families, and this cultural context provides well-established cultural ideologies of equal parenting responsibilities, an institutionalized early childhood care system, and a strong focus on children’s agentive participatory rights in arenas of social life, including family. In the US, there is greater diversity in how parenting is achieved; some families make use of directive trajectories which display hierarchy and authoritative control by parents, while others verge on being permissive, with children being more in control. Simultaneously, our study shows the complexity of daily life in family and the amount of work and negotiations – with multiple embodied resources – in handling everyday, very mundane tasks.

YJB: The book illustrates how children are socialized to moral personhood through collaborative embodied interaction among family members in a choreographed or orchestrated manner. While the practitioners’ ideological emphasis on individualism and child-centeredness may encourage child agency, it seems to me as if the book’s theoretical approach may as well contribute to the depiction of children’s agentive role. Everyone participates in an on-going interaction as equal participants through mutual monitoring and mutual meaning-making, and can affect the unfolding of interactional trajectories. I wonder whether you think the mutual monitoring is something everyone does or everyone has to do. In other words, what kind of moral person is projected by the theoretical framework itself through the ways of public display of data analysis?

MGH and AC: Goffman (1972:63) defined the social situation as “an environment of mutual monitoring possibilities, anywhere within which an individual will find himself accessible to the naked senses of all others who are ‘present,’ and who find themselves accessible to him.” In other words he was concerned with general principles of any encounter: the interdependent organization of mutual intersecting consciousnesses, inhabiting unfolding time together with the lived experiential world. Mutual monitoring is distinctive from collaboration or being accountable.

As we state early on in the book (p. 19), our concern is with examining family life and children and parents as “mutual apprentices” in routine embodied practices through which they act in co-operation with one another, building the social worlds they inhabit. We examine the active contributions of both children and parents to practices of control, caring and mundane creativity in specific social contexts and conditions for development. We find that parents are learning from their children as much as children learn from parents.