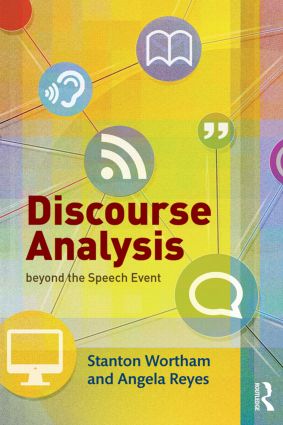 Angela Reyes and Stanton Wortham: A comprehensive, scholarly answer to that question would require quite a bit of historical work – for example, tracing the development and influence of Hymesian taxonomies that privilege the “speech event” as a coherent unit of analysis. But here we can offer a few observations and speculations. First, it’s important to see that we are describing a traditional approach to discourse analysis that analyzes either discrete non-recurring events, or recurrent types of events. There is a lot of work that claims to describe the structure of discursive events, where the analyst intends to analyze a type of event that allegedly recurs in similar form across time and space. Much of that work is of course useful, and there are in fact types of events that recur and deserve analysis. But we are after a different unit of analysis, a chain of linked events that are not the same from one to the next, but across which signs move and actions are accomplished.

Part of the history that led to a focus on discrete events was technological, we imagine. The tape recorder was a crucial technology which allowed people to record interaction and then play it back repeatedly for analysis. There have been recording devices before, but inexpensive, portable tape recorders democratized access to interaction. This made it easy to find an interesting event, to transcribe it, and to focus on its discursive structure. And there were also traditions of studying canonical events, likes certain kinds of narratives, which led people to focus on high visibility events that were discrete.

Alex McGrath: To what extent do you think the infrastructures of new media shape discourse, and to what extent do you think this should be something that the discourse analyst is aware of? I’m thinking of things like comment threads or the limited social information retrievable from a given speaker on a platform like Youtube, for instance, or the ways that old threads of discourse can resurface years later and become active again. Is this really just a matter of new media discourse having a different space-time envelope than face-to-face communication, or is there something else crucially different about the ways that new media discourse develops that the discourse analyst must account for?

Angela Reyes and Stanton Wortham: The general principles about indexicality, metapragmatic regimentation, and the like remain the same across contexts. But it is clearly true that different media and different contexts will have varying structures and affordances that are distinctive. You will not be able to do compelling discourse analysis of a particular medium or a particular context, like the social media contexts that you mention, without knowing about the affordances of the kinds of specific features that you describe.

With respect to social media, it is worth pointing out that contemporary work has begun to show how you cannot make a clear distinction between the dimensions of social processes that take place through social media and those that take place through other channels. In his analyses of mediatization, Asif Agha argues convincingly that we cannot see “media” as a separable domain with its own organization and principles. Instead, there are social processes that are ongoing: social identification, commodification, and others. In the contemporary world significant pieces of these processes take place through media of various kinds. And we have to understand the affordances of those media in order to understand how these processes work. But we are not analyzing media as a discrete site or media processes as discrete processes. Recent analyses by Elaine Chun, Jan Blommaert, and others offer nice empirical examples of this.

Alex McGrath: Does Discourse Analysis Beyond the Speech Event provide a vocabulary for describing how stereotypes and prevailing ideologies can be contested, or rendered unstable? Could you talk for a bit about how your method accounts for how people exercise agency or resist dominant ideologies and representations?

Angela Reyes and Stanton Wortham: We would like to think that our methodology can be applied to study processes of the kind that you are describing. It is not intended to be suited for only one theoretical perspective or other with respect to questions like power and agency. It is important to note that the cross-event perspective which we are drawing on, and applying methodologically, does have something to say about the idea of agency. There was a distinction between structure and agency that was important several decades ago, and subsequent discussions of ”structuration,” which allegedly resolved the issue. A cross-event perspective, as it has been developed over a couple of decades now, tries to move beyond this conversation. Unexpected, emergent patterns cannot always be attributed to a human individual’s action. In fact, there are reasons to be concerned about the Enlightenment perspective that imagines autonomous individuals who issue agentive changes into the world that spring from their intentions alone. The analysis of unexpected patterns is crucial. It is equally crucial not to reduce people to structures or stereotypes, thus removing what is often called their agency. But from our perspective emergence and unexpected patterns derive from chains of linked events, events which are never solely constituted by one individual.

Alex McGrath: How would the discourse analyst account for unfolding discourse in which multiple channels of semiosis are key in establishing pathways, or co-constitutive with other semiotic channels in solidifying indexicals? Cases in which, for example, a color becomes a salient indexical along with certain formal linguistic features, strengthening pathways and shaping alignments, as in Norma Mendoza-Denton’s account of high school cliques in Homegirls: Language and Cultural Practice Among Latina Youth Gangs (2008).

Angela Reyes and Stanton Wortham: That is an excellent point and example. It is absolutely the case that sometimes crucial indexical signs come in various media — visual, auditory, and so on. Obviously, in order to study multimedia signs we need recording instruments that give us access to them for analytic purposes. That means video, at least, in addition to voice and text. The analytic framework we offer in the book is flexible enough to include indexical signs from multiple different modalities. But the logistical challenges in recording and then analyzing signs from multiple modalities are substantial.

Another important issue your question raises is what counts as a sign (linguistic or otherwise) in the first place. Our approach is committed to tracing what is attended to as a sign, so what participants orient to is absolutely key. Researchers could have all of the recording equipment in the world, but we should not be romanced into believing that these technologies bring us closer to an unmediated truth about some reality. As analysts, we need to privilege participant perspectives: what they attend to as a meaningful sign in the world, rather than what we researchers believe these to be.

Alex McGrath: Lastly, were there any challenges or surprises to writing a methods book? Did the development of this project differ from your previous projects in any significant ways?

Angela Reyes and Stanton Wortham: When one writes a dissertation, and subsequently has to do empirical projects, one realizes that methods are critical. Theories and conceptual speculations are a dime a dozen. People make them up all the time, and they publish them, and you can always make up your own or find relevant ones out there. But having a systematic method is absolutely crucial to moving forward, and the method has to have a certain level of systematicity and validity in order to be worthwhile. With respect to the practicalities of getting academic work done in the real world, methods have a crucial place. With this in mind, we wanted to make the book useful to people doing empirical research. Thus we focused on a couple of key examples and tried to work through them systematically. We also tried to offer systematic guidelines, overviews, and procedures. We wanted to make complex concepts clear but not simplistic, so that people from various disciplines at various stages could see the full methodological value of linguistic anthropological theories of discourse. We hope that our approach is useful to others in their research.