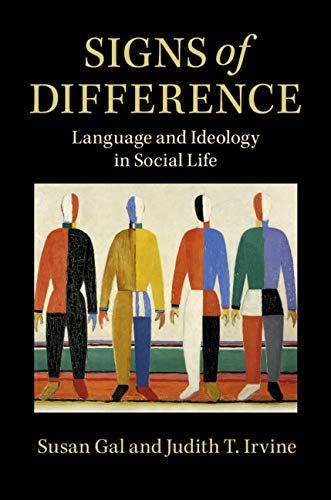 Hannah McElgunn: Signs of Difference begins with analyses that draw from long term ethnographic engagement in two very different places: Bóly, a town in Southwest Hungary, and a rural, Wolof-speaking town in Senegal. How has working together, across such seemingly different fieldsites, influenced the approach to language and social life that you present in this book?

Susan Gal and Judith T. Irvine: Our collaboration started with those unexpected parallels between our separate ethnographic projects. Reading each other’s papers and listening to each other at AAA meetings, we saw amazingly similar processes in two fieldsites that were utterly worlds apart. The happy result has been a semiotic approach to difference, an approach that is much wider than our own ethnographies but is well illustrated by them. Our book is mainly devoted to developing and explaining that approach, but it begins by showing how it applies to the two ethnographic cases.

In the German-Hungarian town in Hungary as in the Wolof-speaking town in Senegal, people were making distinctions among themselves not only through the way they spoke but also through different forms of emotional expression, clothing, houses and numerous other signs and activities. Language, social organization, geography, history, were all quite different. But in both towns, as it happened, one social category of people spoke and acted in relatively reserved, restrained ways; the other category, by contrast, seemed to be more elaborate in everything, more vivid, dramatic. These were stereotypes of difference. People oriented to these social types, often enacting them in their everyday lives. But how to understand the weird parallels between the two towns? “Restrained” vs. “elaborate” were the ways the people in our two towns characterized their own differences. But when we read fieldwork by others, we saw that although there were always overarching cultural distinctions that organized relations between contrasting sets of people and signs, those distinctions could be quite different from ours. For instance, there was: tough vs. soft in one place but in another pragmatic vs. political. To understand our own examples and others, our explanations would have to be quite abstract. And semiotic.

The book explicates step-by-step a semiotic process of differentiation, with several aspects, that encompasses all the cases. Contrast – as axis of differentiation – is the fundamental idea. Contrasts in expressive signs pointed to contrasting categories of identity; and the qualities attributed to the signs were also attributed to the people-types indexed by the signs. For those familiar with a particular cultural context, the signs of each identity seemed to cohere and to display the same qualities as the people types they point to. We turned our hand to American and historical examples: How did Yankees come to be thought different types of people than Southerners in 19th century US?  How do faculty differentiate among themselves at an American university? How did the National Rifle Association divide in the course of a crucial political battle? And how do the axes of differentiation themselves change? It was very exciting to work out how the semiotic process we propose illuminates relations between whatever culturally-specific qualities are involved.

Hannah McElgunn: As you note, C.S. Peirce hoped that “a converging, objective portrait of the world” would result from different actors continually refining the conjectures of their peers (88). This is opposed to the project you take on in this book, part of which is to detail the “construction of perspectives that are partial, conventional, and positioned” (88).  Yet, despite the fact that Peirce’s larger project differs so strikingly from yours, his semiotic theory plays a foundational role in your “Ingredients” section. How have you come to understand Peirce as useful for the analysis of social life, despite your divergence?  END_OF_DOCUMENT_TOKEN_TO_BE_REPLACED