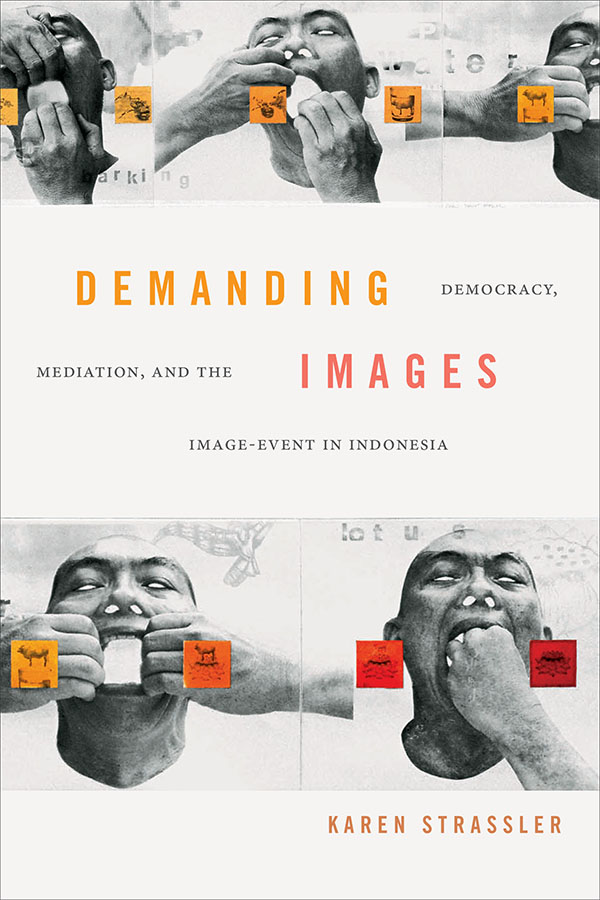 Ilana Gershon: Your book is about the image-event, and I am wondering if you could explain what an image-event is, and how you decided which moments in Indonesia to focus on as ethnographic examples of image-events.  You are quite imaginative in how you choose objects of study, and I was hoping you could discuss the process by which you decide what to explore under the rubric of the image-event.

Karen Strassler: An image-event is a political process set in motion when an image (or set of images) becomes a focal point of affective response and discursive engagement across diverse publics. Foregrounding the centrality of visuality in contemporary public spheres, in Demanding Images I trace a series of image-events in which particular images become the material ground of struggles over competing visions of the nation in a turbulent time of political transition. I argue that in Indonesia, and elsewhere, today all politics has become image politics.

Underlying the term “image-event” is the premise that all images are events in the sense that they unfold in time and across space. Against the habit of thinking of images as fixed appearances at a remove from the flow of events, tuning into the eventfulness of images is a way to think about historical contingency and the dynamic, emergent quality of images as they move, mutate, and proliferate. Rather than conceptualizing an event as a clearly bounded temporal unit, I am interested in how images resonate and reverberate, in their ripple effects. This approach recognizes the volatility of images, their tendency to spawn new iterations, their unruly mutability.

Public images are elusive objects for the ethnographer. Traditional anthropological methods teach us to try to determine the “meaning” of an image through a deep engagement with its “context.” This “thick description” of the image usually entails tying images to specific actors and institutions that produce or consume them. But public images don’t play by these rules. They circulate in viral forms without authors and unanchored to particular sites and institutions. In a Bakhtinian sense, they are always alien and overpopulated with the intentions of others, they never belong to anyone except in the most provisional and temporary of ways. By following the image-event, we can see how images are taken up, how they are reworked, how they elicit speech and action, and how they coalesce a set of anxieties, aspirations, tensions, and dreams that otherwise remain inchoate. We can watch how they happen and track their effects.

My process for selecting image-events to analyze was really no different, I think, from what anthropologists typically do as we select from among the many occurrences that we encounter during research, homing in on those that provide analytic purchase, those that promise an opening to a set of questions or problems, relations or dynamics, that we’ve identified as important. Image-events don’t only reveal what’s already there but—like any event we observe ethnographically—allow us to see the process by which tensions, imaginings, and alignments, take form in real time. My choices of which image-events to focus on were of course shaped by my own (necessarily partial) sense of what was happening in Indonesia in the first decade and a half after the end of an authoritarian regime. Inevitably—and again, as with all ethnography—there’s an element of happenstance. For example, I happened to be in Yogyakarta during the months around the extra judicial killings I describe in chapter 5, and watching that image-event allowed me to think about the street as a medium. I chose image-events that, it seemed to me, crystallized and helped bring into view certain key tensions constituting the post-authoritarian public sphere, both shaping and unsettling democratic imaginaries in Indonesia.

Ilana Gershon: How have Indonesians’ relationships to photographs, and images in general, changed since your first round of research on photographs in Indonesia in 1998-1999?   What has been the effect of having such widespread access to technology that lets people not only to take photographs but also alter them? END_OF_DOCUMENT_TOKEN_TO_BE_REPLACED