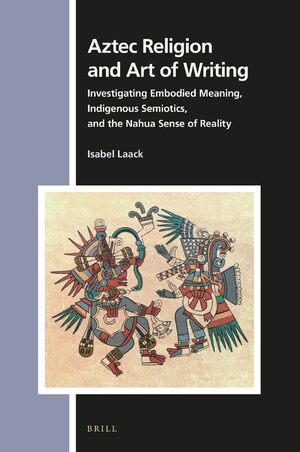 Patawee Promsen: Throughout the book, you choose to use the term Nahua instead of Aztec, as it is the term they call themselves and it includes the larger ethnic groups in the area. I wonder, however, why you chose to use the term Aztec instead of Nahua for the book title? Are there any implications in doing so?

Isabel Laack: Words do not carry any inherent, objective meaning; we use words to communicate our ideas about reality and thus construct this reality. In academic thinking, we strive for clarity in our communication and analyze the meanings commonly associated with terms in their social and political contexts, contexts in which some people have more power to shape reality as others.

The term “Aztec” was coined by Europeans in the 19th century to name the mainly Nahuatl-speaking ethnic groups that formed the “Aztec empire” in the century before the Spanish conquest. Throughout my book, I preferred the Indigenous term “Nahua” because of two reasons: first, to emphasize the cultural traits shared by the people using this language, and second, to raise awareness for the political asymmetries reflected in our European interpretations of the Indigenous cultures of Mexico—including our powers to name them.

Having said that, it is the term “Aztec” that is most commonly used in American popular discourse; and it is also used in academic discourse to distinguish the pre-colonial “Aztecs” from the colonial and contemporary “Nahuas”. When you choose a title for a book, you need to name your subject and approach as clearly and concisely as possible. At the same time, you need to include the terms most probably used by your potential readers, to catch their attention and to be found when they search for literature in internet search engines or academic databases. Consequently, I decided to include the catchy if problematic “Aztec” in the main title but also the more speaking “Nahua” in the subtitle.

Patawee Promsen:. Can you share more about how you have come to be interested in this research topic, especially Nahua pictorial writing?

Isabel Laack: My fascination for Indigenous American cultures was first stirred in high school in the context of the 500th anniversary of the European conquest of America in 1992, when my history teacher taught us to critically reflect on European colonialism. Later, I was privileged to learn more about Indigenous Americans in my university studies of religion and anthropology. These studies were inspired by the wish to better understand their ways of living as well as the injustice initiated by my European ancestors through conquest, colonization, and suppression.

My academic interest in the specifics of Nahua pictorial writing and its correlation with (religious) cosmovision was raised primarily through the books written by art historian Elizabeth H. Boone.  I was deeply touched by the beauty of Aztec and Mixtec painting, intrigued with this form of visual communication, and inspired by Boone’s impetus to overcome Eurocentric biases in our attempts to understand how this form of communication works.

Patawee Promsen: While some scholars tend to treat oral tradition as a primary source of understanding Nahua culture, your book suggests that pictorial writing is equally important, and its role is not limited to just a device for serving orality. In what ways that considering both oral and written literature as being inextricably interwoven will add to a more understanding of the indigenous historiographical genres?

Isabel Laack: The main thrust of my argument is to overcome the interpretative limitations produced by using European systems of communication as the (only) reference point for analyzing Indigenous oral and written genres.

If we look at the few surviving manuscripts written in traditional Aztec and Mixtec writing, we might be tempted to see them as very limited forms of communication—comparing them implicitly or explicitly to the long texts written in the history of Europe in alphabetical writing. Assuming that the Nahuas nonetheless had extensive cultural and historical knowledge, the only possible inference is: There must have been a strong oral tradition complementing the written records. And indeed, colonial sources evidently speak of a rich and elaborate oral tradition including all kinds of media and performative acts.

Nevertheless, trying to understand pictorial writing in its own right—not compared to alphabetical writing—opens our minds to realize that there might be layers of meaning communicated in this system that work beyond verbally expressed thinking. Then, we also realize that the Nahua combination of oral and written traditions is much more complex than previously assumed. Engaging in this way with Indigenous forms of communication teaches us very much about the many human possibilities of making sense of our lives in this world.

Patawee Promsen: Your book offers a fascinating idea of a “material turn” in the study of religion. In the conclusion part, you suggest that Nahua pictography challenges the idea that “thoughts are best expressed linguistically” (p.356). I wonder if you could explain more of why not only phonographic/alphabetical but also pictorial writing can reflect critical thinking?

Isabel Laack: Let me answer this question in two parts, discussing first the material turn and second my interpretation of pictorial writing.

1) Because of its origin and history, the Western academic study of religion is strongly shaped by Christian, Protestant ideas and has, thus far, mainly focused on analyzing the belief systems and theologies, that is, cognitively and verbally expressed interpretations of the world. In the last decades, some scholars of religion have turned their attention away from exclusively examining elite discourses to consider what most ordinary people do with their religion in their daily lives. Thus, scholars have come to realize that religion is lived with all the human senses and the body, not only cognitively but also emotionally, performatively, and in interaction with material and sensory media, such as artifacts and objects, music and sounds, images and colors, smells and food. Scholars promoting the material turn and the aesthetic turn in the study of religion attempt to better understand these ways of religiously making sense of the world, ways going beyond using words.

2) You mention a part of my key argument about Nahua pictorial writing, which challenges the idea that thoughts are best expressed linguistically. In this argument, I refer to the theory of embodied metaphors by cognitive linguist George P. Lakoff and philosopher Mark L. Johnson. In a nutshell, they argue that even our most critical and abstract thinking—such as philosophical thinking—is fundamentally shaped by the ways we perceive our environment through our bodies. A simple example for this is the conception of time as a linear movement in space. According to Lakoff and Johnson, we cannot think abstractly and critically without using embodied metaphors like this. In my book, I applied this argument to pictorial writing by showing its potential to visualize embodied metaphors in images and signs and thus to enable “readers” to understand them and to give them tools to critically reflect on the ideas expressed in the painting.

Patawee Promsen: One of the most important arguments from your book is that semiotic theories are developed differently in different cultures so that it will be a misinterpretation if we use Western knowledge to get the Non-Western’s sense of reality. Can you say more about how deconstructing Western idea of semiotics would be helpful to understand the Nahua’s linguistic theory and their sense of reality?

Isabel Laack: When we engage with people from a culture different to our own, maybe even from an earlier time in history, we might realize that they have a different perspective on the world, a different cosmovision, a different sense of reality. I intentionally use the term “sense of reality” to emphasize the sensorily, bodily aspects of our perception and (performative) interpretations of reality. Furthermore, humans in the many cultures of the world have developed different sign systems for communication, for example language, facial expression and body movements, ritualized acts, images, and scripts. Some of these sign systems, such as phonographic scripts, are secondary sign systems representing a primary sign system such as language.

A “semiotic theory” is an implicit or explicitly voiced theory about the relationship between the signs of a specific sign system and reality. As such, these theories mirror the more general sense of reality of the culture in question. We can use semiotic theories from our own culture to interpret a sign system from a different culture, but this does not tell us much about their sense of reality or their own ideas about the relationship between the signs and reality.

The problem with many Western engagements with people from other cultures is an attitude to essentially assume that Western ontology, interpretation of the world, or sense of reality is objectively true, whereas those of other cultures—if they happen to be different—are not. Sometimes, we need to deconstruct objectifying ideologies (such as Western logocentrism) in order to open our minds for the truth that might be lying in other senses of reality.

Patawee Promsen: You mentioned in your book that religion is not “solely the creation of the scholar’s study” (p.11). In your opinion, how does this study help challenge the Western science knowledge of religion? And how would it help overcome the ethnocentric and intellectualist biases?

Isabel Laack: First, I would like to explain why I quoted J.Z. Smith in my introduction. In the study of religion as in other humanities, cultural studies, and philosophies, there has been an ongoing debate about the ontological status of academic concepts. With his statement “religion is solely the creation of the scholar’s study,” J.Z. Smith argued against objectifying philosophies assuming that the concept of religion as used by academic scholars of religion mirrors categories objectively present in extra-linguistic reality.

My epistemological standpoint regarding the ontological status of academic concepts is more moderate and influenced by the embodied critical realism of Lakoff and Johnson. I believe that a reality exists outside the human imagination, with which we interact bodily and socially. This reality includes both the physical, material reality of our natural environment as well as the social reality formed by what we and other human beings do. Thus, human beings factually do things, things that we in our culture and historical time have decided to denote as religion. The category religion itself, however, does not objectively exist in extra-linguistic reality. We could also use a different concept to name some things people do or debate endlessly what religion is and what it is not, argue about the contents and boundaries of this category. Accordingly, there have been many different suggestions for defining religion. In the end, it is a matter of communicating our ideas about reality.

In my study of the Nahuas, I attempted to show that some common associations with the Western concept of religion do impede our possibilities of understanding how the Nahuas perceived and interpreted reality. I do not claim that all Nahuas perceived reality the same way, but I think they shared some foundational beliefs. Neither do I claim that I come in any way close to how any Nahua 500 years ago might have felt and thought. However, I do claim that if we read the surviving sources of Nahua communication attentively and reflect on the history of European projections, some interpretations of a more general Nahua sense of reality make more sense than others.

Many things the Nahuas did and communicated about their thoughts are very different from European culture. Academic theories about religion, as they are strongly shaped by European ways of seeing the world, might not be adequate tools to understand these things. Consequently, studying Nahua ways of seeing the world and acting in it challenges aspects of these academic theories believed to be cross-culturally applicable and universally true.